Why a Man Shouldn’t Determine My Reproductive Rights 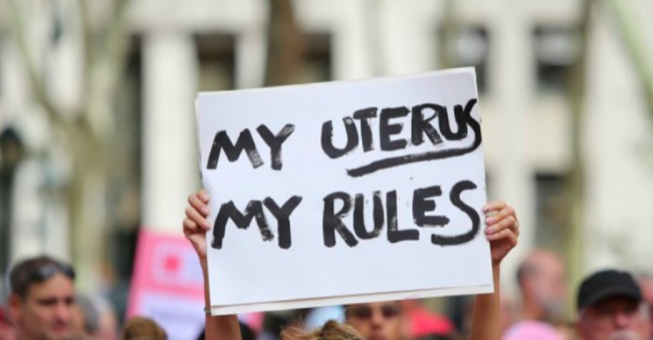 According to a recent press release, the U.S. Supreme Court has temporarily blocked a law that would shut down the last of three abortion clinics in Louisiana by February 8th. In a 5-4 referendum, abortion rights through these clinics were upheld by one vote. After Roe v. Wade, a decision by the U.S. Supreme Court ruling restrictive state regulation of abortion as unconstitutional, you’d think society would recognize a woman’s basic right to decide what happens to her body.

Sexual abstinence is an option, but cannot be imposed upon others. It is crucial not to shame women for their sexual desires, thus it is essential to present practical sex education. Men are able to do as they wish with their bodies everyday without being controlled. For example, there is the sexual double standard where men are praised and glorified when having multiple sexual partners, while women are viewed negatively for it. There is little to no shame for sexual gratification from men, why should there be for women? In addition, a woman’s sexuality should be normalized with the use of contraceptives.

Having access to contraceptives allows for women to be protected from sexually transmitted infections. Other benefits include controlled fertility and reproduction. For couples, this can help in maintaining the well-being of their family and plan ahead. If quality contraceptives were obtainable worldwide, the need for abortions would be reduced. Quality contraceptives should go hand-in-hand with accessible health care and contraceptive counseling, ensuring women are taking effective birth control methods. This would also allow prospective parents to plan the number of children to have and the spacing of them.

Abortions cannot be prevented and are needed throughout the world. Unplanned pregnancies, pregnancies with insufficient lovers, and financial instability are just a few major issues bound to arise with banned abortions, not to mention the risk of dying from childbirth. According to the Journal of Obstetrics, maternal fatalities are 14 times higher in risk than abortions are.

Aside from the previously mentioned reasons, one might still ask: “why are reproductive rights important?” Bearing a child is a huge deal, and bringing a new person into this world has not only a major effect on the parents, but also on the future of our planet. In fact, a project of the Center for Biological Diversity says that “each additional child increases your carbon legacy by 20 times what you could save over a lifetime of recycling.” Possessing the power to decide to have a child is an imperative decision that will impact a woman for the rest of her life and in turn, the rest of the world.

We conceptualize an ideal world to be one where all women have the choice to conceive, become a spouse, and receive access to reproductive health care free from constraint. But the reality of modern-day reproductive rights are much more sinister. In general it is unjust for laws created by men to control what happens to a woman’s body. Access to such care allows for women to plan, pursue educations, and thrive in their careers, worry-free of unplanned pregnancy. These are basic human rights that advance the status of gender equality and increase female empowerment. Women’s rights and reproductive rights are human rights, and if you’re a human, this should matter to you!