“I’m not anti-Semitic, I have Jewish friends!” 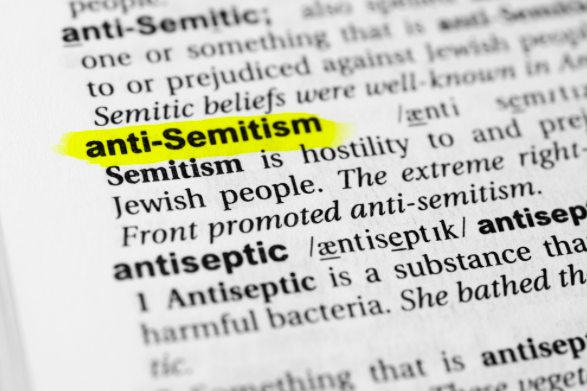 My entire body was frozen. For a moment, all I could hear was gut churning, uninhibited laughter. It wasn’t normal laughter. It was a lot more primal, and uglier than that. Almost like a pack of wild animals celebrating their latest conquest. My face felt hot, and my heart was beating against my chest. I crumbled up my napkin and threw it onto my plate, next to my half eaten pizza slice. I had suddenly lost my appetite. I was nine years old and sitting next to my best friend on her worn living room carpet when it happened. We were quietly chewing with our hands covering our mouths, too shy to talk openly around her older brother’s friends. I looked over, and saw two of the boys roughly pushing each other. The dining room table screeched against the hardwood floor. One of them stumbled backwards. His back slammed into the wall, and that was when he said it, in between bouts of laughter.

“Leave some pizza for the rest of us! You’re being such a Jew!”

That incident may seem small, or even trivial to some of you reading this. But that boy’s comment has stuck with me for nearly a decade. I was always in a school system where I was one of the few Jewish kids in the grade. Sometimes I would be the only Jew in my class. For some reason, I assumed that when I got to college things would get better, but I was in for a rude awakening. When I got to Simmons, I realized that not only do college kids say anti-Semetic things all the time, so do some of the professors. I suddenly felt like I was nine years old, sitting in my best friend’s living room, back where it all began. I refused to make myself small again, instead, I decided that I needed to do some more digging.

I discovered that there is a serious, widespread problem with anti-Semitism in academia. For instance, Harvard University placed a quota on its Jewish students until 1933 under the president Abbott Lawrence Lowell. According to Lowell, his school was full of “hebrews,” and they “were on the rise,” so he limited their admission to a 15% quota (Shapira, 2018). Adhering to typical ivy league anti-Semitic tradition, the Harvard staff then went to work, “classifying each person into one of four categories: J1: a bona fide Jew. J2: more than likely a Jew; J3: “might be” a Jew; and, then ‘Other’”(Shapira). Today, Harvard’s website features a glowing biography on Lowell that conveniently forgets about his anti-Semitism, not to mention his racism and misogyny. There’s even a building named after his family on the Harvard campus, but this was so long ago, right? After all, it’s been almost a hundred years.

Maybe things have gotten better at Harvard, I heard that they even admit students of color and women now! Yeah, not so much. Harvard was recently sued for placing a quota on its Asian and Asian American student population (Shapira). Since ‘hebrews’ are considered white in America now, white Jews have full access to white privilege. But we do not have full access to white supremacy. While Harvard does not place a quota on us anymore, there were 25 reported incidents of anti-Semitism at Harvard University last year alone (AMCHA). What does this say about the culture of higher education if one of the most revered and respected universities has a legacy of anti-Semitism and discrimination still celebrated to this day?

Even outside of the school system, American Jews still face anti-Semitism in everyday life. Aside from a few exceptions, the perpetrators are usually white Christians or white Catholics. And I don’t want to hear that “I’m not really catholic though, my parents just are!” speech. If you or your family are affiliated with either of these religions then you automatically have a degree of privilege over religious minorities such as Muslims, Sikhs, Hindus, Buddhists, and Jews. So if you grew up celebrating Christmas, eat pork and shellfish with reckless abandon, and didn’t have a strict curfew in high school, listen up. There are many things that you should not say to Jewish people, not to mention any other ethnic or religious minorities. It might sound overwhelming at first, but don’t worry, I made a convenient list of things that you should stop saying.

1. “I’m not antisemitic, I have Jewish friends!” You know how this sounds right? You sound like that one white guy at a party that says the N-word and then justifies it by saying that he has black friends.

2. “Wow, you look so Jewish!” or “You’re so pretty for a Jewish girl!” or “Your nose isn’t even that bad!” or “You should really do something about those eyebrows!” Comments like this are quite hurtful. Jewish people are notoriously known to have larger noses and more body hair than most, so avoid commenting on our ethnic features. Also, we should just avoid unsolicited comments on people’s appearance in general.

3. “The Holocaust was so long ago can you just get over it already?” or “anti-Semitism isn’t a problem anymore!” Believe it or not, this rhetoric is actually a type of microaggression, known as a microinvalidation (Schlosser). Just because you have never experienced anti-Semitism first hand, doesn’t mean that it isn’t happening, and if you aren’t ethnically Jewish it isn’t exactly your place to quantify our oppression. The idea that anti-Semitism is not a problem anymore is  a myth, and it’s highly insensitive to suggest otherwise. In fact, 58% all the reported religious hate crimes in the United States are of anti-Semitic nature (FBI, 2018), despite the fact that Jews only make up around 2.2% of the general population (Jewish Population in the US).

4. “Let me guess, you want to be a doctor? Or a lawyer? Or an accountant?” Sounds a lot like a white person asking an Asian American if they’re good at math to me, or a non black person asking a black person if they’re good at basketball. There are heavily anti-Semitic stereotypes that denote the Jewish people to a few professions, and it is offensive to reference them. There are Jewish bakers, authors, yoga instructors, factory workers, stay at home moms, musicians and social workers. Do not put us into a box or place your expectations onto us.

This is by no means a fully comprehensive list. There are many other things that I could talk about, but I won’t, because I don’t want this paper to be overwhelming or oversaturated with information. Instead, I would just like to point something out. Most of the comments that I have outlined seem harmless, or like they aren’t that big of a deal, but that’s how most casual anti-Semitism starts. Most people that say and do anti-Semitic things have been conditioned to feel negatively about Jewish people from a young age, perhaps by their inner circles and surrounding communities, the media, and society as a whole. Even the most innocuous comments, such as “wow I’ve never met a Jew before!” originates from very insidious and a dark history.

If we continue to excuse microaggressions and the painfully deep and traumatizing historical context that they come from, we will only perpetuate a culture full of room for hatred to grow and fester. I propose that we all make an effort to speak more carefully and take greater care when interacting with Jewish people, and for any marginalized groups for that matter, especially within the community here at Simmons University. If you are realizing that you have said anti-Semitic comments before and you are feeling guilty, I urge you to stop yourself and reevaluate. Your guilt isn’t helping anyone. Instead of wallowing, you should use this newfound information as an opportunity to use your privilege for good, and to empower others.