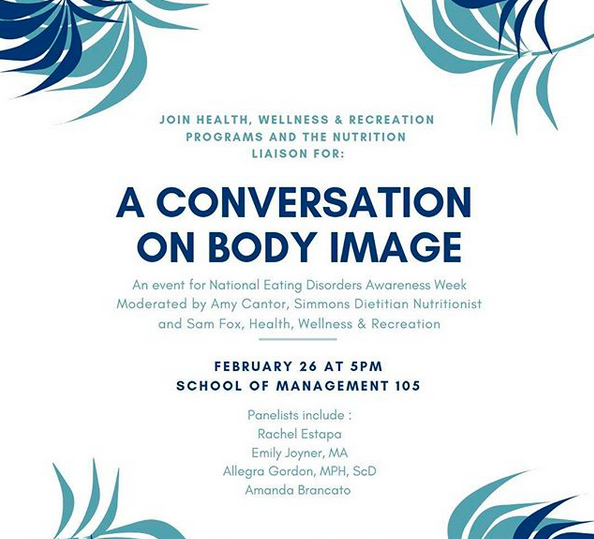 “Who here would say they’ve ever struggled with their body?” asked Rachel Estapa, a panelist at the Simmons Wellness/Nutrition Liaison-hosted event, “A Discussion on Body Image,” on February 26th.

Almost all of the 25 guests raised their hands.

Estapa is the founder and CEO of More To Love Yoga, a Somerville-based yoga studio that caters to bodies not typically associated with mainstream yoga in the U.S. – i.e. not white, thin, and able-bodied. She, along with three other panelists from Boston University, Boston College, and the Harvard School of Public Health, addressed common issues and questions regarding body image, eating disorders, and examined the role of intersectionality in both.

Much of the dialogue focused on building a healthy relationship with one’s own body while immersed in a culture obsessed with diet talk and attaining the “right” figure. This pressure to look a certain way, based on society’s standards of attractiveness, is what sends many people into eating disorders.

“I grew up thinking my body was something to apologize for,” said Estapa. She recounted childhood memories of going to the doctor’s office and being told to keep a “food diary,” having adults poke her stomach and say “Someone’s eaten too much ice cream this summer,” and trying crash diet after crash diet throughout her life.

“I realized there was a moral gradient to food,” Estapa said. “A lot of us are steeped in the idea of ‘right’ and ‘wrong’ foods – there’s a lot of money to be made in it. The shift around moralizing food had to stop with me. I realized: ‘I need to shut up about food.’” She acknowledged, “It is something women tend to bond over, so I had to act in a way that was alone.”

Sam Fox, Coordinator of Health, Wellness, and Recreation at Simmons, acknowledged the gendered social aspect of food moralization: “I grew up in a family with lots of sisters, and negative body talk has been there forever among all of us, like ‘what’s the next way I can lose five pounds?’ I brought a lens of ‘why are we thinking like this?,’, and just in gently challenging those ideas, I’ve noticed a difference in my family.”

“I was extremely lucky to have friends that didn’t talk about going on crazy diets, or losing weight, or what they were eating,” said Brancato. “So I used my friends as motivation. It really helped me to be around friends who were just experiencing life, because life is worth so much more than an eating disorder.”

Panelists also discussed inequities in diagnosis and treatment of eating disorders for people of color and transgender/gender-nonconforming individuals.

“There’s been a myth that eating disorders are for affluent, white, cisgender women – but research shows that that’s simply not true,” said Emily Joyner, a doctoral student in Counseling Psychology at Boston College. “The media representation that exists of women of color can be super stereotypical. That combines with this internalized white standard of beauty to add more burden for women of color suffering from eating disorders. This really needs to be talked about, and often, it’s just not there,” said Joyner.

“Research documents how systems of racism and heterosexism play out in the body,” added Allegra Gordon, a research scientist at Boston Children’s Hospital and faculty member at Harvard Medical School. “We have this body of research, but we’re often not talking about body image. Body image is a central component of health and wellbeing, and intersectionality is a crucial framework in that.”

Both Joyner and Gordon’s academic work aims to address these issues of intersectionality in eating disorder treatment, through population research and more individual studies. Meanwhile, Estapa and Brancato work on the interpersonal, everyday side, helping to spread body positive attitudes either among their friends or through their business. In both their professional and personal lives, these panelists are all taking unique routes to increasing body positivity and reducing eating disorders in a diverse variety of communities.

“A Conversation on Body Image” took place as part of National Eating Disorder Awareness Week, and was hosted by the Center for Health, Wellness, and Recreation at Simmons University. To learn more about the Center, and their services for students who may be struggling with these illnesses, visit their web page.