The Crisis in Venezuela: What You Need to Know 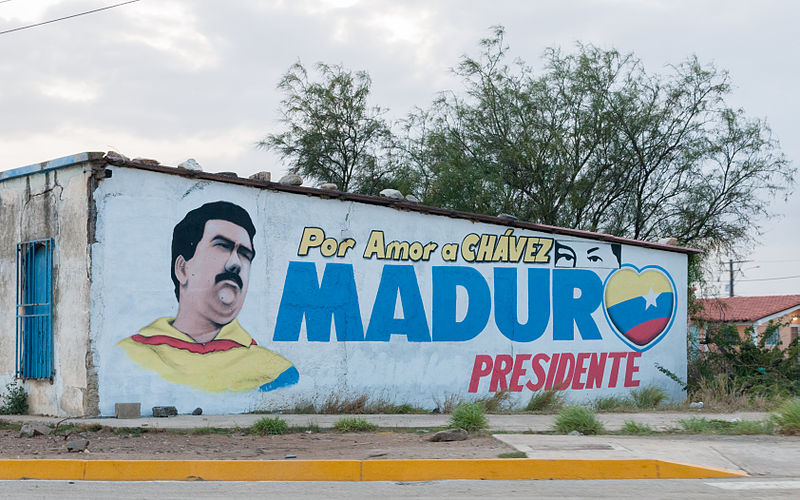 A 2013 campaign ad for current President of Venezuela Nicolás Maduro.

The once oil-wealthy Venezuela is now in the midst of an economic crisis that has forced nearly 90 percent of the population into poverty.

In his denial of the crisis, current President Nicolas Maduro has successfully blocked any form of aid into the country via the Columbian border.

International aid has been resisted by the president.

On Thursday, Maduro blamed the U.S. for exacerbating the situation in his country, “They [U.S.] are trying to fabricate a crisis to justify political escalation and military intervention in Venezuela to bring a war to South America” he said on ABC.

This impoverishment began with economic mismanagement under two presidents, former President Hugo Chavez, and his successor.

According to the Brookings Institute, inflation has skyrocketed over 1 million percent. This not only created one of the worst man-made crisis outside of a war zone but has resulted in severe human rights violations under the current regime.

These offenses include the systematic shutdown of media and detention of journalist, lethal military force against protesting civilians, and humanitarian catastrophe – repeatedly denied by Maduro, and all hallmarks of a dictatorship.

After Maduro ordered the firing of the country’s Health Minister, the entire healthcare system has crumbled. Severe medical shortages have weakened hospitals, some even turning patients away completely because they cannot provide care.

“There is nothing here, they have no medicine, they don’t have food,” said mother Marleea Marino to Al Jazeera news,  “And now my son is dead.”

Venezuelans see hope with the self-declared interim president, Juan Guaidó, who is Maduro’s only opposition. Top nations, as well as several countries in South America and the United States,  have recognized Guaidó as the true leader of Venezuela.

Currently, Guaidó is in Brazil to meet with world leaders – a strategy to put pressure on Maduro, even after he was banned from traveling out of the country, and as Venezuela begins to close its borders.

In the ABC interview, Maduro was asked if he would grant Guaidó back into the country.

“He will have to face justice, and justice prohibited him from leaving the country,” Maduro said, “He has to respect the laws.”

Guaidó is expected back in his home country on Monday, to an unclear fate.