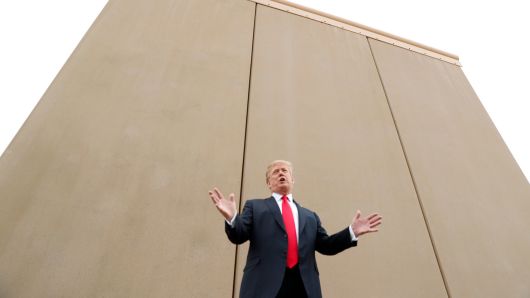 Congress has until Dec. 7 to pass federal funding legislation or they face a possible government shutdown, the third of the Trump administration.

The federal fiscal year begins on Oct. 1 of every year, but had to pass a short-term funding bill in September to give them more time to work on a more comprehensive budget.

They have already approved five pieces of legislation that provide funding to defense, health and human services, labor, energy and water, and the legislative branch and veteran affairs. There are still seven other bills to be passed, however, regarding funding for the departments of Agriculture, Justice, Homeland Security, Commerce, Interior, and Transportation and Housing and Urban Development, among other agencies. These sectors will be affected by the government shutdown if Congress cannot pass the rest of the legislation by the Dec. 7 deadline.

President Donald Trump has made it clear that he won’t accept less than $5 billion from the budget to fund the border wall between the U.S. and Mexico. Democrats have rejected this figure, agreeing to allocate $1.6 billion to the border wall. President Trump told POLITICO he would “totally be willing” to run the risk of a shutdown in order to secure the $5 billion from the budget.

President Trump cited the recent events with the migrant caravan at the southern border as justification to fund the border wall.

“People look at the border, they look at the rush to the police, they look at the rock throwers and really hurting three people, three very brave Border Patrol folks — I think that it’s a tremendous issue, but much more importantly, is really needed. So we have to have border security,” Trump told POLITICO, although the organization noted that his claims that three Border Patrol officers were seriously hurt by the migrants are unsubstantiated.

Not all of the President’s party are as prepared for a shutdown, however. In an October interview with Bloomberg, Senate Majority Leader Mitch McConnell (R-Alabama) stated his desire to avoid a shutdown.

“We invented this back in the 1990s and it didn’t work well for us. Chuck Schumer tried it last January over DACA and he caved within a day and a half,” McConnell told Bloomberg. “How many times do we have to figure out this isn’t going to work whether its a Democrat-inspired shutdown or a Republican-inspired shutdown?”

McConnell might find his October sentiment in Bloomberg coming back to bite him, as neither President Trump nor Democratic leadership seem to be bending on the issue.

Senate Minority Leader Chuck Schumer (D-New York) took to Twitter to share his stance on the budget funding regarding the border wall.

“Our position has been clear from the beginning: D[emocrat]s & R[epublican]s have a months-old agreement in the Senate. $1.6B for border security, NOT a concrete wall or increases in detention beds or ICE agents,” Schumer tweeted on Nov. 27. “We should stick to this agreement. If POTUS interferes, he is responsible for a shutdown.”