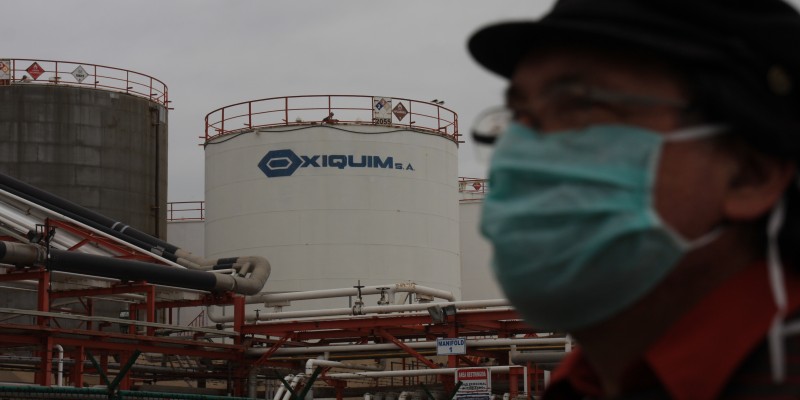 Demonstrators have been protesting the contamination in Quintero and Puchuncaví. Source: Agencia Uno

Over 1,000 people have been hospitalized for chemical poisoning symptoms in the western Chilean coastal towns of Quintero and Puchuncaví since late August. 56% of those cases have occurred in people under 19 years old and 71% of the cases occurred in women. This mass pollution, which has garnered attention from the World Health Organization, is due to excessive emissions from the 17 industrial complexes in the Quintero area.

In August, residents of Quintero began to experience headaches, numbness of extremities, abdominal pain, welts, and vomiting. Of the hundreds of people who have had to seek medical attention, over 100 were examined twice, about two dozen were examined three times, and several sought attention seven times.

The largest suspected culprit of this “toxic cloud” of pollution is the state-owned National Company of Petroleum and Gas (ENAP), which Quintero residents claim has irresponsibly disposed of chemical waste for years. Other companies at fault include the National Copper Corporation of Chile (CODELCO), the largest copper producer in the world.

Residents of the region have held numerous protests against the Chilean government for ignorance of the issue, some of which have resulted in tear gas attacks from police and arrests of minors. Residents have formed a group, “Cabildo Abierto Quintero-Puchuncaví”/“Open Town Hall” where they organize and carry out protests.

On Sept. 27, for a period of 48 hours, Chile’s Ministry of Health began implementing stricter limits on emissions from the 17 companies in Quintero, including a complete halt of hydrocarbon emissions. However, the long-term outcome of this measure has yet to be seen, although emissions have reportedly stopped since the temporary halt.

“Frankly, it’s a short-term and insignificant gesture,” said Sarai Prieto ‘21, who is currently studying abroad in Chile and participating in demonstrations in Quintero. “It does nothing to address the 54-year accumulation of heavy chemicals in the atmosphere or the current public health crisis exacerbated by the total lack of specialists in the area. Intoxicated persons are either misdiagnosed – many children have shown up to the hospital with fainting spells and muscle function loss and have been diagnosed with ‘puberty,’ for example – or go to Santiago or Valparaíso, which erases any record of the intoxication in Quintero.”

A Cabildo organizer, María Luz Gonzalez, noted the progressive environmental degradation in Quintero: “When I was a little girl, my friends and I would set up tents on the beach after school. Those are the fondest memories I have of my youth. Now, the water is poisoned. If I swam there, I’d get a third eye.”

Prieto and the organizers will continue protesting and demanding government action for the intoxication crisis.

“La lucha sigue— [student protesters] still join us at the camp, in protests, and at the community table nearly every day,” Prieto said.