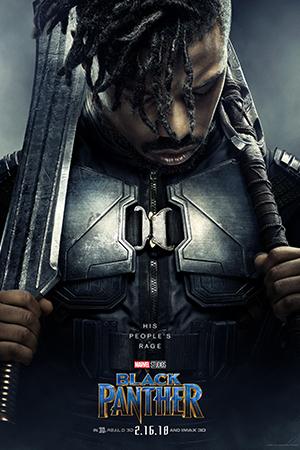 It’s been two years since Chadwick Boseman first donned the Black Panther suit in
Captain America: Civil War. Now, fans across the world are lining up in theaters to see him take down villains in his homeland of Wakanda. Black Panther is the long-awaited eighteenth installment in the Marvel Cinematic Universe (MCU). Critics have been raving about it since the premiere. This film’s stellar cast, gorgeous costumes, beautiful cinematography, and intriguing story are bound to suck you right in.
Black Panther follows T’Challa (Boseman), the newly-crowned king of Wakanda, in his
journey to take back the throne from his usurping cousin, Erik Killmonger (played by Michael B. Jordan.) Wakanda is a fictitious, secretive, and isolated nation in Africa. Its society is more technologically advanced than any in the world thanks to the land’s massive deposits of Vibranium, a precious and nearly indestructible metal. In addition to all of the amazing technology, there are a number of powerful female characters that show their prowess in battle.

Black Panther is a stunning vision of Afro-futurism that director Ryan Coogler has
crafted by drawing from African cultures and folklore as well as pop-culture and sci-fi. There are even some memes peppered into the dialogue. The costumes, Wakandan language, and architecture have elements from Kenya, Nigeria, and Tanzania (to name a few.) The film’s beautiful color scheme is apparent in both the scenery and costume design. In an interview with Genuis, composer Ludwig Göransson said his musical score was inspired by traditional African music. Göransson partnered with Senegalese musician Baaba Maal. Kendrick Lamar also released an album inspired by the movie and its music, which has reached number one on the charts.
CBS labelled Black Panther as a “momentous event in pop culture history.” One of the
many reasons it is so important is that it is one of the first-ever high-budget movies directed by an African-American man featuring a mostly-black cast. Representation is important. In an interview with Vulture, Marvel producer Kevin Feige said that he wants young black children to see superheroes on screen that look like them. io9 reporter Charles Pulliam-Moore wrote that “on-screen representation is an important part of how we, as a society, send messages about our values and ideas about different kinds of people.”

Everyone wants to see themselves as a superhero. Thanks to Coogler, black children all over the world will be able to identify with Black Panther. These children will see that they can be just as heroic as the iconic Captain America or Iron Man. After seeing this addition to the MCU, it is certain that Avengers: Infinity War is going to blow us away.