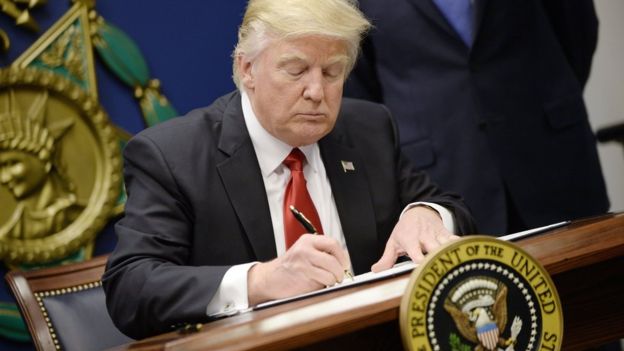 The severity of the ban ranges from preventing visitors and immigrants from North Korea and Syria from entering the United States to prohibiting certain Venezuelan government authorities and their families from entering the country. With regards to Chad, Yemen, and Libya, there are exceptions to the ban if an individual has a business or tourist visa. In Iran, those with student and travel visas are exempt from the ban. Visitors from Somalia are not strictly prohibited, but they will experience severe vetting prior to being allowed to enter the U.S.

As reported by CNN, President Trump, in a White House statement regarding his motives behind the ban, proclaimed, “My highest obligation is to ensure the safety and security of the American people, and in issuing this new travel order, I am fulfilling that sacred obligation.”

In the weeks following Trump’s announcement organizations have challenged the government in court over the legality of the ban. On Monday, Oct. 16, Maryland U.S. District Court Judge Theodore Chuang heard the case against the ban from advocacy groups, like the American  Civil Liberties Union and International Refugee Assistance Project. These groups are once again challenging Trump’s travel ban, stating that the ban is unconstitutional because it targets Muslim majority nations and therefore discriminates against people from different nationalities. The federal government argues this is not the case because, as opposed to earlier versions of the ban, it includes North Korea and Venezuela, two non-Muslim majority nations, and has exemptions to the ban.

Garrett Epps, a contributor to The Atlantic, believes that these travel restrictions will be determined constitutional in the court. The first travel ban was implemented without much government planning and caused chaos throughout the court system.  The second travel ban, which addressed some of the implementation and structural issues of the first travel ban, still had no authority in the court system. The third ban, according to Epps, “may very likely be upheld. Its terms are tailored to specific countries; it includes two non-Muslim countries, Venezuela and North Korea; and, most important, it contains broad authority for consular officers to make individual exemptions for deserving cases in the affected countries.”

The fact that people from other nations are not protected under the Constitution, which under the equal protection clause and the Establishment clause prevents individuals from being discriminated against based on religion, reinforces the idea that potential immigrants’ rights regarding freedom of religion should not be taken into consideration when ruling on the constitutionality of the ban.

The U.S. has to see if this ban will be upheld by the court, and if so, what the potential consequences of it would be.

Editors Note: As of the date of publication, U.S. District Judge Derrick Watson of Hawaii temporarily blocked the travel ban from taking effect.