Thousands take to the streets in Barcelona after referendum vote 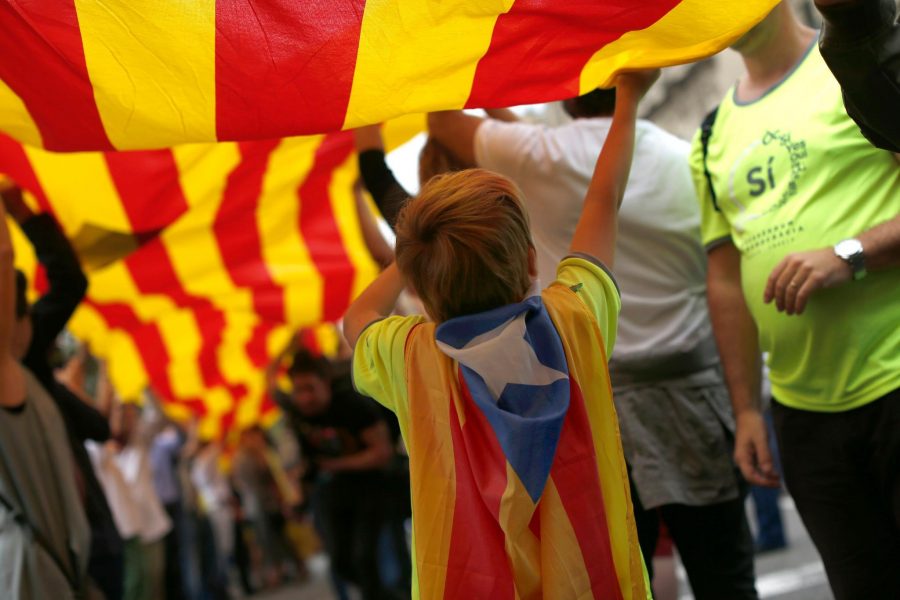 Metropolitan Barcelona transformed into a city-wide site of protest on Tuesday following an outbreak of violence during Sunday’s referendum vote for Catalan independence.

At Plaça Universitat in the city center, thousands gathered to demonstrate, proclaiming “Els carrers seran sempre nostres (The streets will always remain ours).” Local firefighters, who on Sunday clashed with Spanish police to ensure polling places remained open, were applauded.

A child wears a Catalonia independence flag during protests in Barcelona on Oct. 3, 2017. Source: Francisco Seco/AP.

The protestors and strikers were not unilaterally separatists gathering in favor of independence—one youth carried a Spanish flag and a sign reading “No soy independentista, pero no tocarán a mi pueblo (I’m not for independence, but they will not touch my people).” He, too, was met with applause.

After months of contentious back and forth between Spain’s Prime Minister Mariano Rajoy and local Catalan government, an independence referendum took place on Sunday against orders from Spanish courts. In the leadup, Spanish police seized ballot boxes from polling places. Websites and smartphone applications with information about voting in the referendum were blocked by Spanish internet providers.

Following the death of dictator Francisco Franco in 1975, Spain ratified its constitution in 1978. Rajoy and Spanish judiciary opposition to the referendum takes root in the document which deems the independence movement unconstitutional.

Nonetheless, the referendum took place on Sunday amidst heavy violence. Spanish riot police, in an attempt to secure ballot boxes and physically prevent citizens from voting, injured over 800 people. Officials reported that a number of police officers were also hurt over the course of the day.

Near the region’s ports, farmers parked tractors across highways to keep more riot police from disembarking.

Outside Catalonia, including in Madrid’s central Plaza del Sol, thousands gathered to peacefully protest the actions of the police and support the vote. Inside the region, cultural institutions joined the fray.

Europe’s largest football stadium, Barcelona’s Camp Nou, featured a league match between FC Barcelona and Las Palmas played behind closed doors in an empty arena that usually holds over 100,000 spectators. In contrast to their usual uniforms, Las Palmas players entered the stadium wearing the Spanish flag on their jerseys.

Several Catalan players went on to cast their own votes after the game, which center-back Gerard Piqué described as “the worst professional experience of [his] career.”

On Monday, the Spanish national team suspended training after 20 minutes when the aforementioned players were verbally harassed by supporters. Piqué was the primary target of fan’s ire. “If anyone believes I am a problem for the federation, I will step aside from the national team before the World Cup [in Russia next summer],” he told the media after the match against Las Palmas.

Although approximately 90 percent of the tallied votes were for independence, only 42 percent of Catalans participated. Pre-referendum polls were strictly divided, with just under half of respondents favoring splitting from Spain.

However, Catalan president Carles Puigdemont considers the results a unilateral victory for Catalan independence and publicly condemned the intervention of Spanish police.