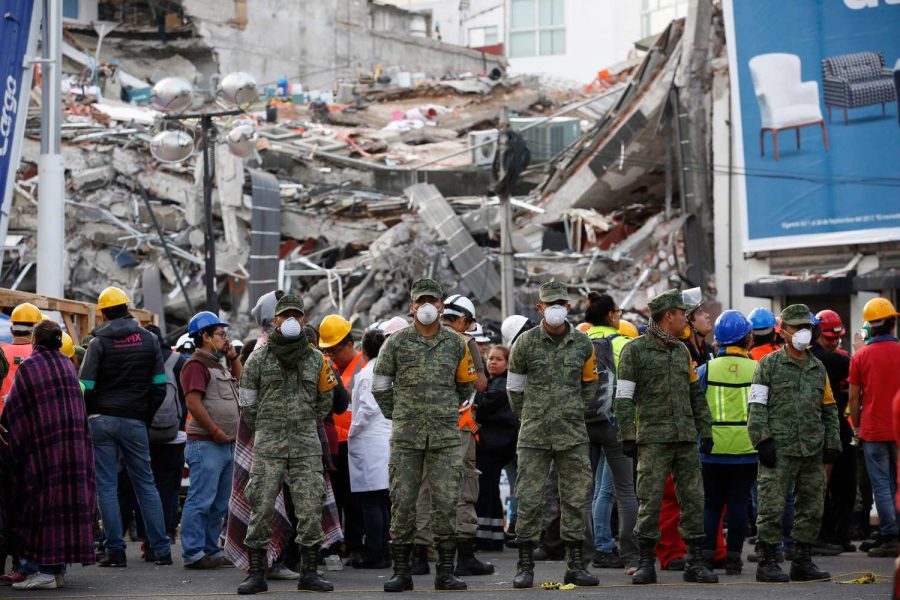 CORRECTS TO CLARIFY SITUATION WAS AN EVACUATION - Rescue workers and volunteers stand in the middle of the street after an earthquake alarm sounded and a small tremor was felt during rescue operations at the site of a collapsed building in Roma Norte, in Mexico City, Saturday, Sept. 23, 2017. All rescue workers atop the rubble were able to evacuate safely via an adjacent building. (AP Photo/Rebecca Blackwell)

1. Southern Mexico is still reeling from the four earthquakes that have hit the region since the beginning of September. The first, on Sept. 8, was an 8.1 quake that occurred off the Pacific coast. The second was on Sept. 19, a 7.1 quake just south of Mexico City. The two most recent quakes, on Sept. 23, were a 6.1 southeast of Oaxaca, and a 4.5 centered in Oaxaca. As of now, 400 people are reported to be dead and many are still missing (CNN). The two recent tremors disrupted aid efforts as crumbling infrastructure gave way and workers had to halt evacuations to remain safe.

2. The combined effects of hurricanes Irma and Maria have decimated Puerto Rico. Damage-assessment teams are still working to understand the extent of the electrical problems so the government can obtain the materials and manpower needed to begin fixing the structural problems (NBC). Island residents are still unsure of when they will have power and hospital generators are quickly running out of fuel. While officials call for swift aid, residents are disappointed that the international aid response has been slow. Trump has pledged federal help, but the U.S. government has yet to approve an aid package for Puerto Rico, a U.S. territory. Hillary Clinton urged the Department of Defense to send a Navy medical ship to Puerto Rico, and Nancy Pelosi said, “Our fellow Americans in Puerto Rico. . . deserve to know that their government will be there for them, without question or hesitation.”

3. Sunday, Angela Merkel won a fourth term as chancellor of Germany. Her party, the Christian Democrats (CDU/CSU), won back 33% of the seats on the Bundestag (the German parliament), but the Alternative für Deutschland (ADF), a right-wing nationalist party, won 13%. This means that, for the first time in 60 years, a nationalist party holds legitimate power in the German government. Political analysts suggest that this is because of serious backlash to Merkel’s policy of admitting thousands of refugees (NPR). In the wake of this loss, Merkel vowed to listen to ADF voters to try to win back their vote with “good politics” (The Guardian).

4. Tensions between Catalonia and the Spanish state have increased as supporters handed out 1 million ballots a week before people are due to vote on the referendum for Catalonia’s independence. The Spanish government has already arrested and fined several officials who openly supported the referendum, and are threatening to imprison Catalan President Carles Puigdemont. The Spanish government has also stated that they will not be recognizing the results of any vote that takes place, and that Catalan does not have the proper systems in place to produce a valid vote (Reuters). Spanish police have also raided government offices in Catalonia and seized millions of ballots, posters, and pamphlets (Al Jazeera). Puigdemont claims that Spain is acting “beyond the limits of a respectable democracy” in order to stop the vote (The Guardian). Regardless of whether or not the referendum happens, it is unlikely that a declaration of Catalan independence will be internationally recognized.