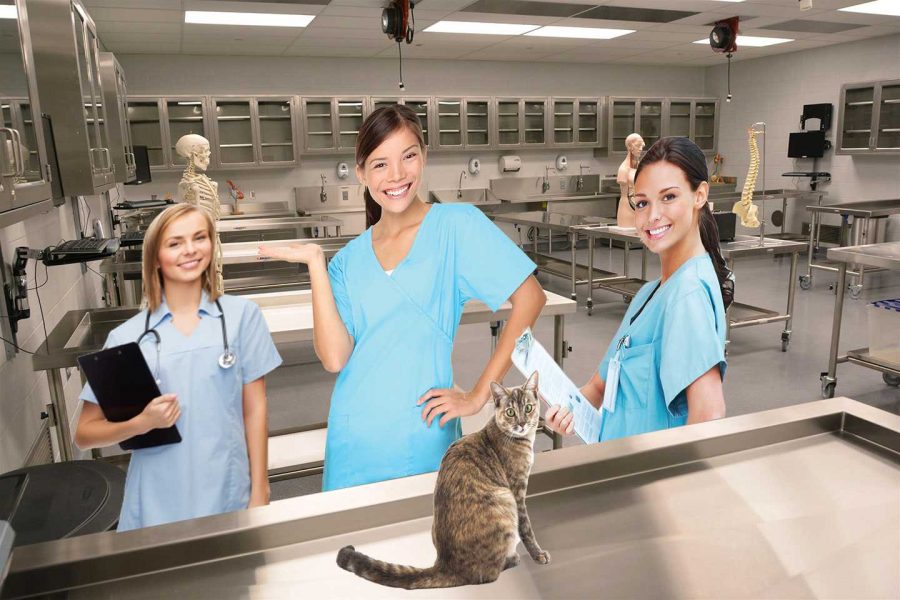 Nursing students made a startling discovery on Tues., March 31, when they realized that they somehow resurrected the cat they were supposed to dissect for a class.

Science professors on campus quickly arrived on the scene  to see what marvel of medicine these students had discovered, but failed to conclude exactly how the cat came back to life.

“This is honestly the weirdest thing I’ve ever seen, and believe me, I’ve seen a lot of weird stuff,” Professor Diana Montague said. “Rats and mice fighting in a war on campus? That’s weird. This cat coming back to life is even weirder.”

Nursing student and sophomore Emma Vuong was working in the same lab when she noticed that the cat on a nearby dissection table was rolling over and batting at the air.

“It was a shock,” Vuong said. “Now I’m even more freaked out by having to dissect cats for my classes here.”

The cat, named “Mr. Fitz” by nursing student and junior Brittany Ramirez,  has been adopted as a secondary mascot for Simmons University. Mr. Fitz has even attended multiple Simmons athletics games to help cheer on the Sharks as they progress forward in the spring 2666 season.

“[Mr. Fitz] is such a great support system to have,” lacrosse player and first-year Hannah Louise Elmhurst said. “I love seeing him dressed in his cat-sized Simmons jersey in the stands at Daly Field. It’s, like, really cute.”

As for now, Mr. Fitz is working on controlling the mouse and rat populations on the Academic and Residence Campuses at Simmons. Administrators hope that having Mr. Fitz on campus will be one of many solutions to break tension between the warring factions of mice and rats at Simmons.

“You know, I think that the mice and rats just need to unite against a common enemy, and then they’ll see the error of their ways,” International Relations Professor Veronica Vonn Hoppsburg said. “Having Mr. Fitz as a threat should be scary for [the mice and rats]. I hope peace talks will be held  soon.”

“[Mr. Fitz] is so great to hang out with,” Crosse said. “When all of the other communications majors and I are in the lab until, like, three in the morning, Mr. Fitz provides such a calming presence.”

Mr. Fitz and the nursing students who resurrected him will also be attending the upcoming Simmons Leadership Conference  in the Seaport District to show off the tricks that they taught Mr. Fitz while he was in the lab.

“I’m so impressed that [Mr. Fitz] was once dead and yet, through the miracle of life, we can teach him new tricks,” nursing student and first-year Patty Thompson said. “It’s like that old saying goes.  Cats really do have nine lives.”

Simmons administrators and the College of Arts and Science faculty are hoping that the nursing students’ presentation will lead to book deals, TED Talks, increased funding, and maybe even a reality television show to promote the STEM program at Simmons.

“Mr. Fitz is such a wonderful marketing tool for Simmons to have,” Public Relations Manager Timothy Roberts said. “He’s a cute cat, has a funny name that is so relatable to America, and, I mean, he was resurrected in our very own Park Science Building labs. I feel like having Mr. Fitz as an alternative mascot to Stormy the Shark helps us appeal to other audiences and markets around the world.”

Simmons University Admissions has predicted that Mr. Fitz’s resurrection on campus will draw in more applicants for the 2667-2668 school year as well.

“Listen, with this cat at Simmons, we are going to have so many more accepted applicants choose Simmons over their other college acceptances,” 2667 Admissions Fellow and junior Jenny Royce said. “Like, come on. We have a cat on campus. What do other schools have? Lame statues of animals that can’t come to life?”

The love for Mr. Fitz and his story of resurrection is truly felt throughout the Simmons and Colleges of the Fenway communities.

“We’re trying to figure out who the next Mr. Fitz will be,” nursing student and sophomore Samantha Ngo said. “Maybe one of the frogs we have to dissect will come back to life and jump out of its box. You never know what’s going to happen in the lab now that Mr. Fitz is here.”