The national budget and student involvement 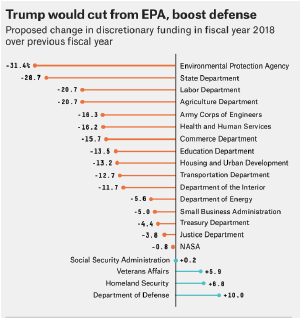 This week President Donald J. Trump released the new National Budget. One of the highlights of this budget is the increased military budget.

President Trump, has proposed to increase military spending by $54 million. This is a $52.3 billion increase from the previous budget, which means more spending on military equipment and supplies.

The president has also proposed to increase spending on homeland security by $2.8 billion. This will be on issues such as border security technologies and money dedicated to building the wall on the border of the United States and Mexico.

The budget also sets aside over $300 million on training and employing new Border Patrol agents, as well as Immigration and Customs Enforcement personnel.

President Trump has also proposed to decrease spending for Education by 14 percent, and decreased spending by 16 percent on health and human services. This includes issues such as healthcare for low income families, medicare and medicaid, and conducts tons of health related research.

President Trump has also proposed to decrease spending on UN and other diplomacy and development related by 29 percent.

Now more than ever it is important for students to stay informed and updated on the current political situation in the United States. Especially since policies and releases such as this release can have a direct impact on the lives of many students.

There are many ways to stay involved and educated as a student since there are many organizations on campus that focus on political awareness such as Democracy Matters, which meets on Tuesdays at 6:30 p.m. at Quadside.

Democracy Matters is a non partisan national organization that aims at getting big money out of politics. The Simmons College Chapter of Democracy Matters also aims to help students stay more politically informed.