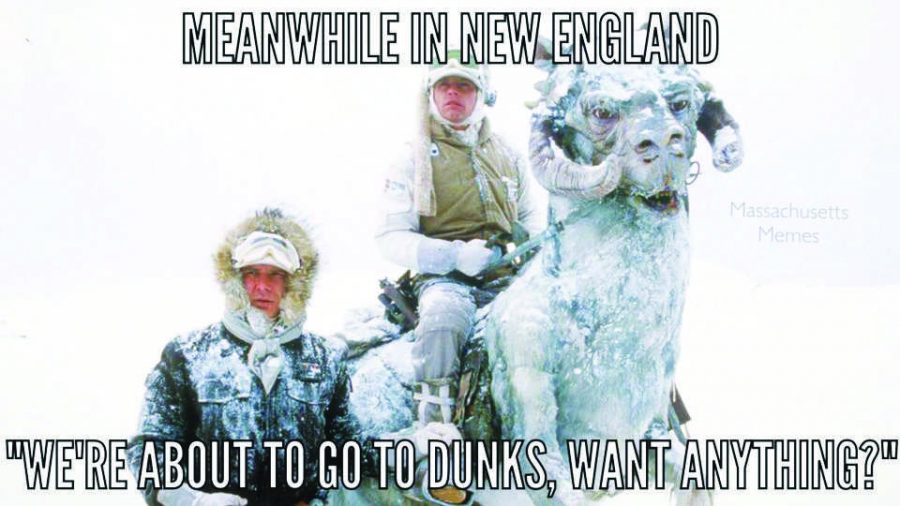 1. “Star Wars: The Empire Strikes Back”

Our first meme is a shot from the movie “Star Wars: The Empire Strikes Back,” with Luke Skywalker and Han Solo on Hoth, an ice planet. The text on this image reads, “Meanwhile in New England: ‘We’re about to go to Dunks, want anything?’”

In “The Shining,” Jack Nicholson plays an alcoholic father turned murderer. One of the final scenes in the movie shows the father stuck in a snowbank, dead and frozen. Someone created a meme out of this ominous shot with the words, “‘Come to New England!’, they said.” “‘You’ll love this time of year!’, they said.”

Did you know that the show “Whose Line is it Anyway?” still exists? Drew Carey used to host it, but now its hostess is Aisha Tyler, a well-known talk show host. Anyway, our meme relates to the show back when Carey did it, and it reads, “Welcome to New England, where the weather is made up and the seasons don’t matter.”

While we may not know what the weather will be tomorrow, we can guarantee that the memes will continue to snowball. Stay warm, bundle up, and meme on you crazy diamond.