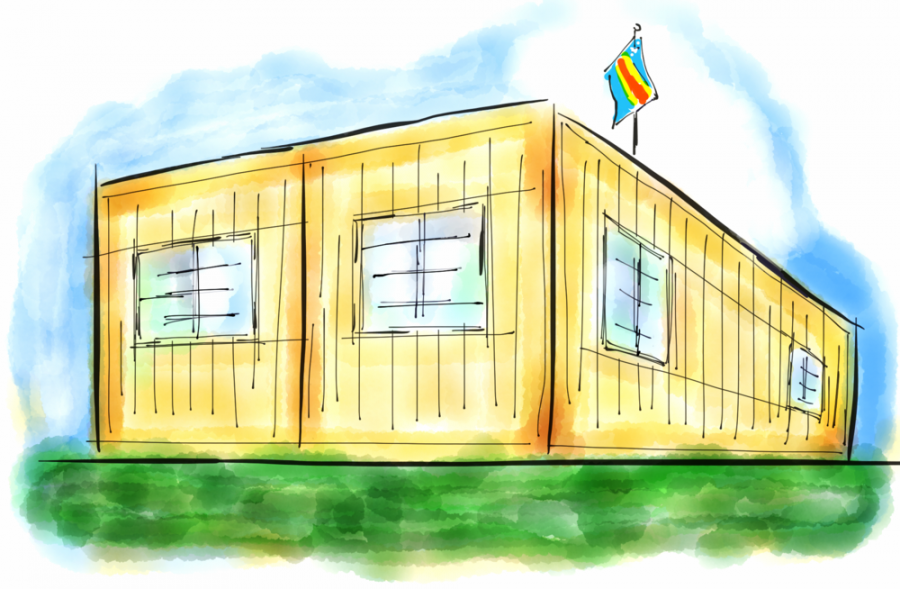 On Friday, Dec. 9th at 11 a.m. The Shark Simmons College Radio will be hosting a tribute show dedicated to the recently departed Len Mailloux, the former advisor to the radio station. His Radio Performance and Operations fall 2016 class will plan and perform this tribute show. It will also kickoff a 24-hour broadcast “pledgeathon” entitled “Express Yourself” hosted by the station to raise money for a cause Len believed in.

“When the radio station team tried to find a way to honor Len, we kept coming back to his love of radio and education. When Julia [Taliesin] mentioned that the books for the Congo hadn’t been sent yet, radio jumped at the opportunity to help out and combine it with what we do best: broadcast,” said Danielle Annecston, the current station general manager.

The “books for the Congo” refer to an ongoing service project Len had been carrying out. In his Communications class “Globalization on a Shoestring,” Len and his students worked to collect books from students at Simmons to send to the Democratic Republic of Congo to help with the opening of the first public library in the country.

In his time teaching this class, Len and his students collected over 1,500 books for the project, but due to shipping costs they were never sent. The station hopes to raise enough money to send these books to Paul Freedman, a documentary director and Len’s contact in LA, who is heading the project with Fidel Bafilemba (who is in the DRC).

This pledgeathon will begin with a 90-minute tribute show hosted by Len’s fall 2016 radio class: Haya Al-Dabbous, Milena Robles-Wong, Ashley McAdams, Caitlin Bowers, Alison Hull, and myself, Emily Cole. The group will be playing a handcrafted playlist filled with both songs Len loved and songs that remind them of Len as well as fond memories and stories from every member of the class.

After what turned out to be a somewhat turbulent semester, the class decided the best way to end the semester was to all work as a team to produce a show using everything they had been taught by their late professor.

Also in the studio will be Len’s wife Diane, various other members of the radio station, and even alumna of the college who were touched by Len’s teaching. This show and pledgeathon will serve as a dedication to Len’s legacy and hopefully allow us to bring his legacy across the world.

“Express Yourself,” the 24-hour live pledgeathon named after the song by artist N.W.A. and the notorious theme song for Len’s “Media and the First Amendment” class, will continue on through the night after the tribute show featuring past and present members of the radio station.

Both students and staff will take turns at the microphone telling stories, playing various styles of music from show tunes to disco, and overall trying to raise money to carry out Len’s vision. There will be board games and food provided and anyone is welcome to attend.

“We really want to create a space where the campus voice is heard in memory of Len and have a blast while doing it. It’s what Len would have wanted,” said Annecston.

The Shark Simmons College Radio welcomes any and all to attend, listen, and donate to the “Express Yourself” pledgeathon in memory of the late professor Len Mailloux from 11 a.m. this Friday, December 9th through the following Saturday, December 10th. It is guaranteed to be a day of laughter and giving in memory of a great professor, mentor and friend.

Learn more about the initiative to help create the first-ever public library in Eastern Congo at the website www.congolibrary.org.