‘Kubo and the Two Strings’ is a lasting visual masterpiece 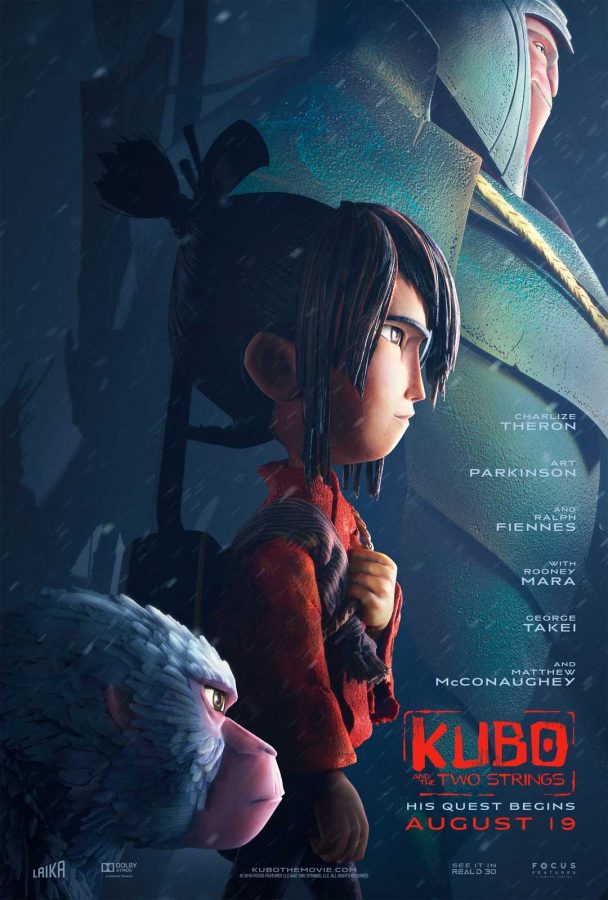 Take a boy who makes magical origami, a wooden toy monkey who comes to life, and a man who is part beetle and you have “Kubo and the Two Strings.”

The film follows the story of a young boy who is on an adventure to find a magical suit of armor and weapon. He must defeat a hostile spirit who had taken his eye from him when he was a baby. Along the journey, Kubo finds faithful companions who help him vanquish monsters that want to stop their quest.

“Kubo and the Two Strings” is a highly acclaimed stop-motion feature film. The animation is smoother and less abrupt than most stop-motion movies. The visuals are breathtaking, especially when monstrous creatures confront Kubo or when he uses magic. The landscapes that the film portrays are particularly noteworthy. The audience is transported into a vast world that is both serene and deadly.

The scale of the project is incomparable. The amount of work that went into each design, puppet, and movement is obvious when watching the film.

Out of all the stop-motion films, “Kubo and the Two Strings” should be rated up there with “Coraline.” Both use an extensive color palette to express the magical nature of the world the characters are inhabiting. Also, the films both capture such a wide range of emotions in the characters’ faces.

According to IMDB, about 23,187 prototype faces were created for Kubo, allowing 48 million possible facial expressions. Another interesting fact, Kubo actually beat “Coraline” for longest stop-motion feature by one minute (it is one hour and 41 minutes long).
The characters, while not wholly original, are nevertheless enjoyable. They interact well with each other, sharing witty banter and compassionate moments.

The main characters were played by Art Parkinson, Charlize Theron, and Matthew McConaughey. Parkinson has a great voice for animated films and should perform in more animated roles. Theron has the perfect voice for a passionate motherly support system who is strong and resolute. Surprisingly, McConaughey was a delight to listen to as the role of Beetle.

Despite this being ironic because this is his first animated film. He was a highlight of the feature.

The plot may be simple and at times cliched, but it has heart. An audience member ends up enjoying the story because they end up caring about the characters who are so affable and falling in love with the visuals.

It is a film that not all will fall in love with but others will find it incredible. “Kubo and the Two Strings” leaves an impression and will be enjoyed by audiences for years.