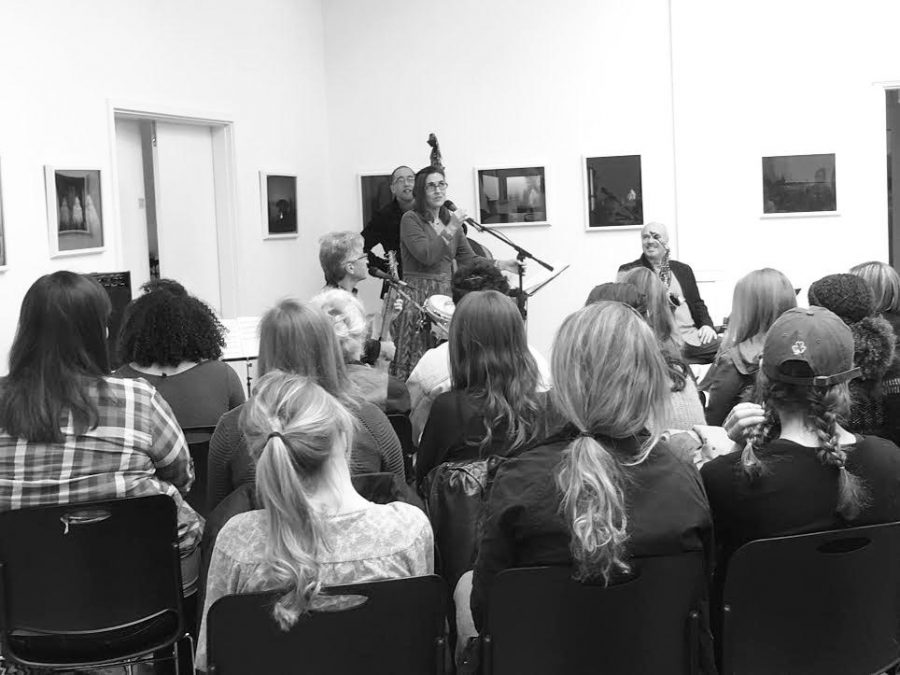 Rosi Amador, the lead vocalist and percussionist, studied as a classical singer for ten years and was one of the founding members of the award winning group Flor de Caña, where she worked as a manager for ten years. Her husband, Brian Amador, studied at the New England Conservatory in Boston and performs on Spanish guitar and voice. He composes and arranges many of Sol y Canto’s pieces, and was awarded a MacDowell Fellowship in 2009.

The upright bass player Keala Kaumeheiwa received a bachelor’s of music at the University of Wisconsin-Madison before going to graduate school at the New England Conservatory. He currently works at MIT, teaching jazz combo ensembles. Paul Lieberman performed on the soprano and alto saxophone as well as the flute, and currently plays all over the world as a sideman, leader, and Music Director of Jaimoe’s Jasssz Band.

The group performed as a combo with one person per part, with the exception of some vocal duets. They flawlessly communicated during the performance, which is necessary in sections with improvised melodies. The different types of Latin styles they performed included the salsa, the aire de son jarocho, the bolero, the cha-cha, and the rumba flamenca.

The most unique aspect of the instrumentation was the large variety of percussive instruments used. Throughout the program, Rosi Amador used claves, a cowbell, maracas, bongos, and the viberslap, an instrument based off the quijada, which is very present in Afro-American Latin music. The variation of instruments reflects the diversity of Latin cultures, incorporating many distinctive sounds and rhythms.

Many of the songs the group performed came from their recent album “Cada Día un Regalo” (Every Day a Gift), with examples including their songs “Obsesión” (Obsession), “Tu Jardín” (Your Garden), and “Beso Discreto” (Discreet Kiss). However, they also performed a few songs from their children’s album “El Doble de Amigos” (Twice as Many Friends), which added a fun variety to the concert. An original song they chose to perform was “Love Wins,” which is about the Supreme Court case that legally recognized marriage equality.

During the later part of the concert, the group encouraged the audience to clap and sing along to certain songs, creating an excellent level of audience engagement. Overall, the performance created a wonderfully fun  environment immersed in Latin-inspired music.