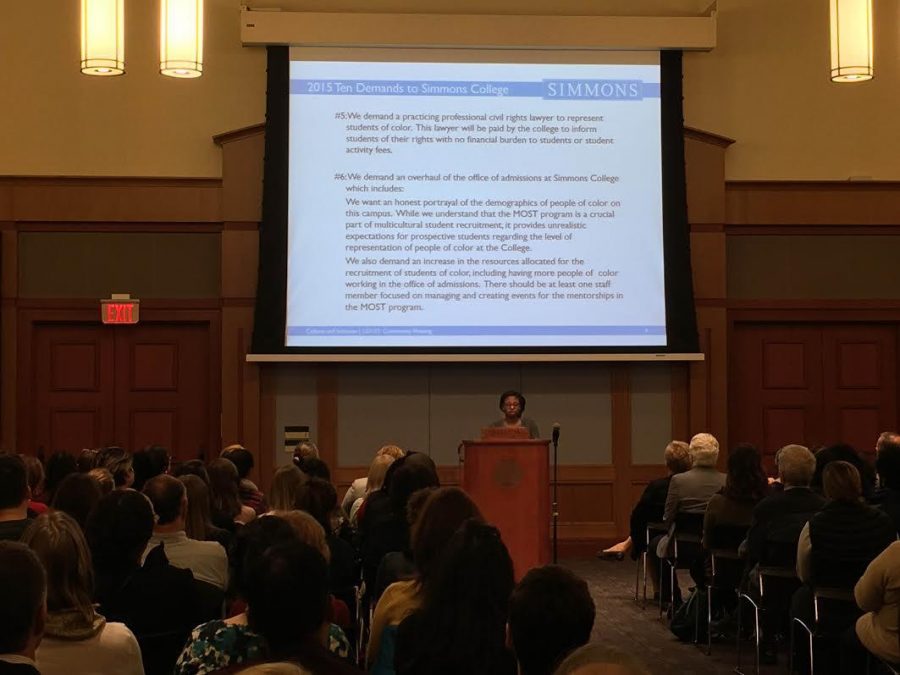 On Tuesday, Dec. 1, as a continuation of the community conversation held two weeks ago, the Simmons community gathered to address the demands put forth by the students of color who staged the Nov. 17 demonstration in Common Grounds.

In contrast to the last community meeting held in the Linda K. Paresky center, this time the entire room was filled with chairs; there were so many members of the Simmons community present that dozens of students, faculty, and staff needed to stand in the back of the room.

President Drinan opened with a brief address, focusing on the importance of community and climate. Drinan also addressed the meeting that she and Provost Katie Conboy had with students of color two weeks ago in Simmons Hall.

“If you are a student, and you want to talk to the dean of your school, you are welcome at any time to do so,” Drinan told the assembled crowd.

Provost Katie Conboy, who was present at the past community meeting, was introduced next.

Following Drinan’s introductions, Morgan Ward, President of the Black Student Organization, read the ten demands that Simmons students of color put forward two weeks ago, highlighting the most salient points of each demand.

“I think that the experiences that students of color have here at school are pretty memorable,” said Ward in regard to the demand to address tokenization in classrooms and traumatic experiences.

“Through the community meetings that we’ve been having, faculty members, administrators, and students have been supportive of these demands,” Ward told everyone present. “If we continue to fill up this space, the conversation continues. One of my biggest fears was that I would come into this room and no one would show up.”

After Ward re-addressed the ten demands, President Drinan took to the podium once more to reveal some initial plans that have been formulated in response to provide a means of action going forward.

Dean Sarah Neill will be overseeing the changes that fall under the first demand, and Lisa Smith-McQueenie and Neill will both be responsible for the changes necessary to meet the second demand.

Once President Drinan had revealed these point people, Provost Katie Conboy addressed some progress in planning the college has identified, and also called attention to the ongoing need for volunteers who want to be involved in moving forward.

Curriculum revision was another identified area of action. “We will work with students to identify areas of concern within existing curricula and to develop recommendations for curricular revision,” said Conboy.

In response to the events two weeks ago, it was also announced that the faculty senate turned its upcoming Dec. 16 meeting into a training on microaggressions, and that Catherine Paden and Katie Conboy are committed to reviewing the Simmons Course and considering a significant overhaul of the coursework involved before fall 2016.

Associate Dean of Diversity and Inclusion Lisa Smith-McQueenie stepped up to the podium and announced some other points of action going forward, which were as follows:

Establish leadership and responsibility for fostering diversity and inclusion goals at Simmons College;

Create a campus climate and culture at Simmons where each member of our community experiences regard for their humanity, diversity, dignity, and contributions; increase the knowledge and skills of faculty, staff, and students to meet the challenges; seek opportunities to build diversity and inclusive excellence;

Develop and implement programs and activities designed to foster a culture of inclusion for all constituencies and enhance diversity in all its forms;

Design and implement a comprehensive and collective system of responsibility, accountability, and recognition for all diversity and inclusion efforts to sustain a campus culture that promotes our values and missions.

Smith-McQueenie also addressed the next steps, which include identifying a representative student group to work with the college leadership on issues of inclusion and diversity, and announced that there will be an established meeting schedule for spring 2016 complete with clear purpose, goals, and a feedback loop. Smith-McQueenie also invited students to meet with her as well as Sarah Neill to share ideas for a multicultural center on Dec. 11 at 11 a.m., location t.b.d.

President Drinan then addressed concerns from the crowd. Some of the concerns raised were about support for Dix Scholars of color; another person asked if the list of people responsible for overseeing individual demands would be available to the entire Simmons community; and others raised concerns about adjunct faculty going through effective diversity training.

Professor Afaa Weaver also spoke, expressing his support for students of color, and called to attention the need for support of professors of color as well.