Professors discuss the history and current state of HIV/AIDS in the U.S. 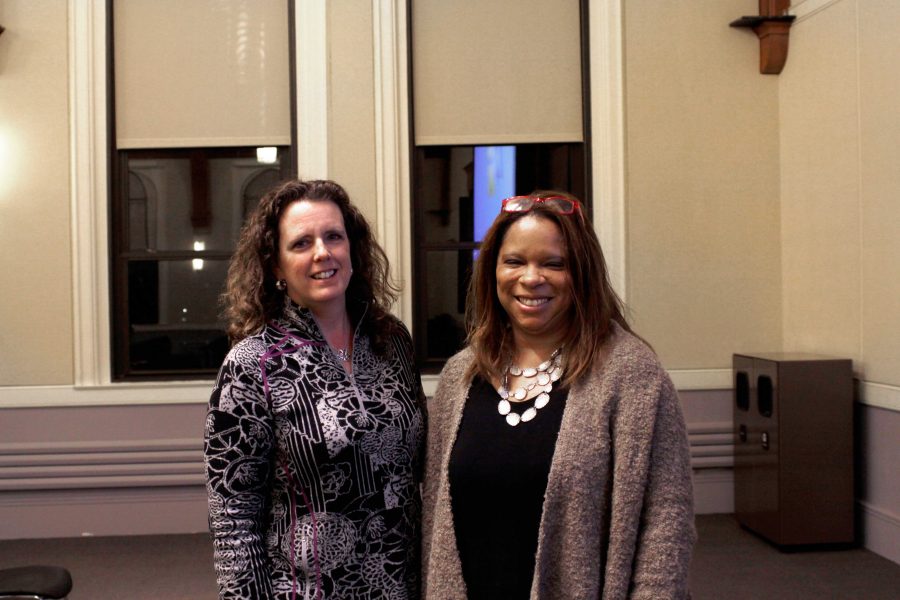 Sexuality, Women, and Gender Center (SWAG), Black Student Organization (BSO), Pre-Health Liaison, and Simmons Alliance co-sponsored an event that featured professors Jenna Canfield and Donna Cole talking about the history of HIV/AIDS and addressing the current state of HIV/AIDS in the U.S. as well as worldwide.

SWAG opened the event by showing a video called “AIDS at 30: The U.S. Epidemic” to provide an introduction to how AIDS has impacted the U.S. in the last three decades.

The Pre-Health Liaison introduced Jenna Canfield, the first speaker of the night. Professor and current chair of the Chemistry and Physics Department, Dr. Canfield’s research focuses on the world of viruses and infectious diseases, including Kaposi’s sarcoma, the AIDS-defining skin cancer.

The virus first appeared in communities of gay men in the early 1980s; in 1982, intravenous drug users, hemophiliacs, and others who had had blood transfusions had also contracted the virus, which suggested to researchers and health professionals at the time that there was an infectious agent in blood. Although the virus first appeared in 1981, it took another four years to develop a test to screen blood for the virus.

In spite of an educational campaign launched in 1987-88 that was intended to combat ignorance, it was only partly effective, as stigma and ignorance are still prevalent even in 2015. Dr. Canfield discussed the lack of education regarding HIV/AIDS in U.S. schools, and discussed the biology behind viral transmission, risk factors, symptoms, testing and identification, and treatment.

Following Professor Canfield’s presentation, Dr. Donna Cole was introduced. She is a professor of sociology here at Simmons, and teaches the class Health, Illness, and Society, including several others.

Dr. Cole discussed that she had initially begun college as an accounting student and described the classes she had to take with increasing disdain. “I hate accounting,” she said. When she first took a sociology class, she became passionate about the subject, changed her major, and has never looked back.

“I’m a medical sociologist, but I see myself as a sociologist first,” said Cole, who spent time in Botswana at a time when AIDS was initially very prevalent. “When I think of my time in Botswana, I think of all the people we lost, and I tell myself that we can’t do anything about the people we lost, but I think about how we can help stop losing people.

“HIV/AIDS is a disease of poverty, a disease of the vulnerable; it preys on people who have limited access to healthcare,” said Dr. Cole.

Dr. Cole then discussed the initial outbreak of the “rare cancer” affecting populations of gay men in the early 1980s, and showed a picture of Ken Meeks, one of the first pictures of an AIDS patient. Initially, AIDS was classified as a disease that affected gay men, but in 1986, a case of AIDS was traced to vaginal intercourse.

Cole also discussed Ryan White, who was a hemophiliac who contracted AIDS via blood transfusion and was banned from school, highlighting the stigma surrounding the disease. Magic Johnson was another high-profile AIDS case; he resigned from his basketball career in 1991.

“People feared playing basketball or even practicing with him, because at that time they thought the virus could be contracted by perspiration,” Cole said. “They thought they were going to get the virus that way.”

Eric Wright, also known as rapper Eazy-E, was the executive producer of the definitive gangster rap album “Straight Outta Compton” and died at 31 from AIDS complications. Cole quoted his last words: “Like the others before me, I would like to turn my own problem into something good that will reach out to all my homeboys and their kin. Because I want to save their asses before it’s too late.”

As of last year, 1.2 percent of people are HIV positive worldwide, 50 percent infected are women, and in the U.S., 14,000 new infections occur every day.