How do you Trump this: the campaign strategy of Donald Trump 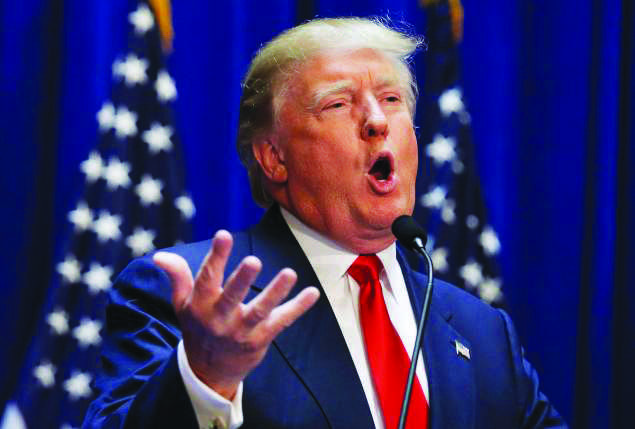 Donald Trump has been in the news recently for the controversial comments he has made during campaign rallies.

“Every time I speak now, it’s on live television,” Trump remarked to the packed auditorium in Rochester, New Hampshire, craning his neck as he peered into the camera.

The backdrop of New Hampshire citizens erupted with applause. Then, as the audience quieted, Trump summed his campaign succinctly: “It’s a simple business, ratings. If I didn’t get ratings, these cameras would not be on.”

A bold statement, perhaps, ebbed with the trademark smug air that Trump has become known for since announcing his presidency in June 2015. For the past three months, the press have devoured Trump’s outlandish remarks, condensed into marketable sound bites, printed onto bumper stickers, replayed into the living rooms of any American who owns a television.

But the Republican frontrunner makes a valid point: the commodity of Donald Trump comes down to dollars and cents. Media outlets don’t have to look hard to follow the money that comes with the honest, unfiltered, and wildly controversial campaign Trump is selling.

In July 2015, the Huffington Post published an article equating the campaign to an efficiently marketed business model that accomplishes what all candidates seek: creating a narrative for the press.

During a campaign stop in Rochester, Trump took this combative campaign strategy a step further by seemingly supporting an Anti-Muslim statement that questioned the President’s heritage.

During an open forum portion of Trump’s rally, an unidentified supporter stated: “A big problem in this country is called Muslims,” the man began, met with a supportive nod from Trump, “and we know our President is one.” Sparse, somewhat tentative applause sounded from the audience. “Right,” Trump replied, still nodding.

In typical Trump fashion, the clip seemed to explode within a matter of hours; edited into news spots, debated amongst other Presidential candidates and average citizens, and criticized by an outraged portion of the Muslim community.

Trump took to Twitter following backlash from both Muslim and non- Muslim people questioning his statements, writing: “If I would have challenged the man, the media would have accused me of interfering with that man’s right of free speech. A no win situation!”

Ben Carson, fellow Republican Presidential candidate, remarked during an NBC interview that he “would not advocate that we put a Muslim in charge of this nation.” Carson went on to state that Muslim beliefs are incompatible with the Constitution, and thus do not “fit within the realm of America.”

CNN anchor Jake Tapper criticized Trump’s response, stating that, as a Presidential candidate, Trump still has a responsibility to shut down bigotry. Tapper shares the sentiments of many who believe that Trump utilizes the media as a strategy to protect criticized remarks, both embracing and blaming the power of the press.

“You’re not responsible for what he says, but this is raw, unvarnished, ignorant bigotry,” Tapper confronted Trump during a televised interview.

Tapper’s words both echo and divide: as a business mogul, the product Trump sells is a controversial one. But it’s also widely recognized, practically unavoidable. Regardless of personal political opinions, Trump’s understanding of audience and platform is reflective of his roots as a multi-millionaire businessman.

What strikes many as a cheap PR stunt is, to the packed venue at Rochester, New Hampshire, effective leadership style. As the divide deepens, controversies mend, and allegiances are declared, Trump’s chronic foot-in-mouth syndrome is sure to offer more outrage, more missteps.

And for every misstep, the simple business model prevails: controversy sells.