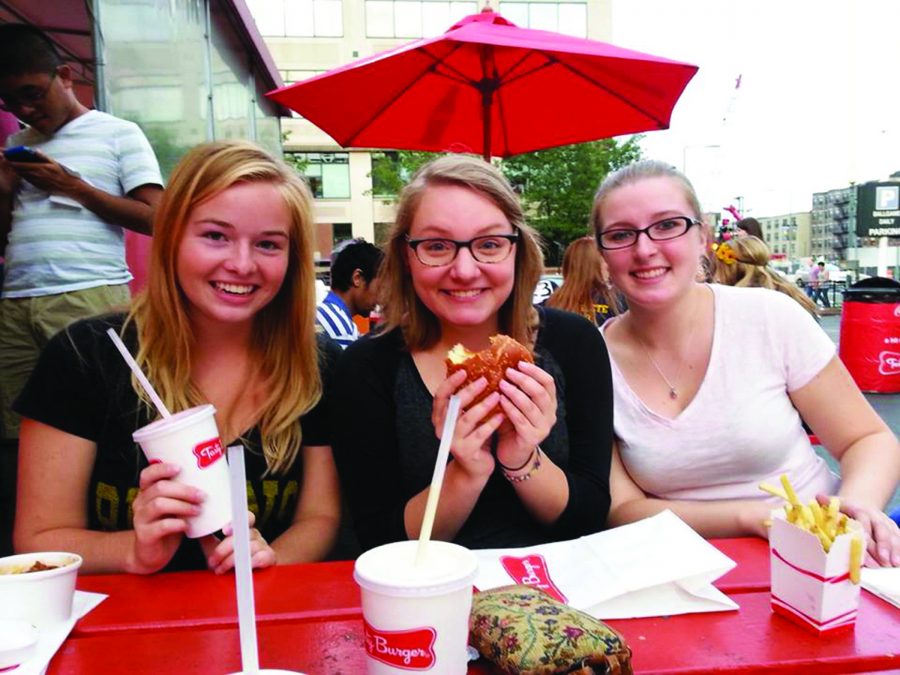 It has been said that a picture is worth a thousand words. With a camera in her hand, senior Photo Editor Christine Gronberg has been capturing the essence of life as a Simmons student.

She has asked students about their thoughts on Ebola and Thanksgiving traditions, while also illustrating the beauty of living in a city and the “terror” of having a campus invaded by geese.

It is with a heavy heart that I say that the Voice will be losing Gronberg next year as a result of her graduating in a few weeks. She is majoring with a Bacheor’s degree in International Relations with a minor in journalism. Last Tuesday was her final production night for the paper and, of course, reminiscing occurred. She recollected how she was recruited by Sarah Kinney, former editor-in-chief, after finding her passion for writing during her junior year.

“We were in a journalism course that took us to South Africa,” said Gronberg. “During the class, Sarah edited my features and blogs and looked over my photos too. That summer, she mentioned that the position of Photo Editor was open for the fall and asked if I was interested. I obviously said yes.”

Current editor-in-chief Eva Weber is glad to have had such a talented individual on the team.

“Christine’s been an excellent photo editor. She’s never let me down; she’s great about coming up with creative ideas to cover and she does an excellent job of covering events on campus,” said Weber.

Gronberg recalled her favorite aspect of being an editor on the Voice.

“I love being able to get students involved with the Voice by taking their picture and getting their honest opinions,” she said.

She has written countless articles and has taken many photographs. Some of her articles have been personal accounts of the educational trip to South Africa she was on while others have covered the topics of Halloween candy and the Witches New Year. However, there is a clear favorite among them.

“This past winter, I asked students what they thought the name of the next snow storm should be —we had endured probably four or five at that point—and the names they came up with were creative and hilarious,” said Gronberg. “It was a fun way to express frustration with the weather and unite random students under that banner of blizzard hatred.”

Working on the Voice definitely has its benefits, but they can vary from person to person. Everyone’s experiences are different. For Gronberg, it was the people who made her experience so memorable.

“I only recently became involved with the Voice though I have been on the emails for four years,” she said. “During my short time on the Voice, I’ve met some pretty cool people and learned more than a few show tunes.”

In one word, Gronberg described the Voice as “spunky.”

“The Voice staff are a great bunch of people and I’m glad I had the chance to be a part of it,” she said.

When thinking about her future after graduation, Gronberg has a clear goal in mind.

“I am looking to get my masters degree in Conflict Analysis and Resolution and maybe someday join the State Department as an ambassador,” she said.

For anyone who is interested in getting involved in the Voice and/or is thinking about majoring in communications, Gronberg has a piece of advice for you.

“I took a few comm courses and waited until junior year to realize I wanted to pursue a journalism minor,” she said. “You do not have to be majoring in journalism to love to write.”