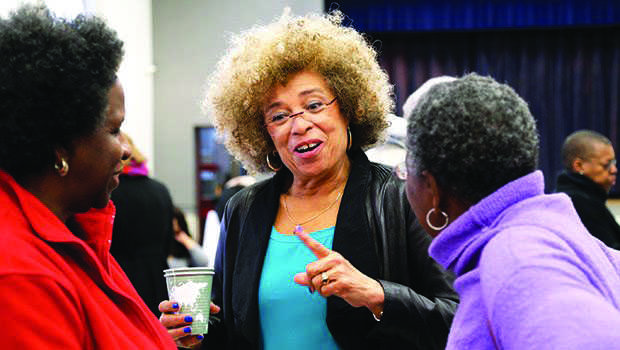 Over 500 students, faculty, alumnae, and community members crowded into the Holmes Sports Center on Feb. 6 to celebrate Black History Month with activist and author Angela Davis.

Davis, a prominent figure in the civil rights movement and an advocate for gender equality, returned to the College 26 years after her first speech, speaking at length about racist state violence and activism.

Davis spoke at length about the parallels between the civil rights movement and today’s racial struggles, urging the audience to read “We Charge Genocide,” a petition submitted to the UN in New York and France by the Civil Rights Congress in 1951.

The petition charged the U.S. with the genocide of black citizens, a violation of the 1948 UN Convention on the Prevention and Punishment of the Crime of Genocide.

“You will discover that there is an uncanny similarity with conditions we are discussing and protesting today,” Davis said.

Davis called the decisions of the Missouri and New York Grand Juries in the cases of the killings of unarmed black men Michael Brown and Eric Garner respectively, failures, but wondered aloud whether indictments in both cases would have been satisfying.

“The conviction of one or two or five or ten or a hundred or a thousand perpetrators of racist state violence is not necessarily going to transform the structural character of that violence,” she said to the applause of the crowded gymnasium.

Davis added that while liberal ideology drives us to focus on individuals, it is impossible to solve the problem of racist state violence by calling on individual police officers.

“I’m not saying that individuals shouldn’t be held accountable,” she said. “What I am saying is that we have to embrace projects that address these socio-historical conditions that enable these individual acts.”

Davis also encouraged the audience to expand their view of slavery and genocide of African Americans by studying the colonization and oppression of people throughout the history of the world.

Davis also touched on the importance of solidarity throughout the world, pointing out world travels by activists like Frederick Douglass and Malcolm X, and how she was saved by international solidarity.

Davis also spoke about her own travels during the height of protests on Ferguson. She met people in England, Italy, and Turkey who were protesting and standing in solidarity with protesters in the U.S.

“I don’t know whether we are always conscious of the degree to which solidarity has come to us from other places in the world,” she said. “Too often we don’t ask ourselves, ‘How do we reciprocate?’ We tend to think of ourselves as the center of the world.”

Davis also expressed her admiration of the internet as a way for young activists to unite and form communities.

“Social media has been flooded with messages of solidarity from people all over the world. And I think it is important for us to acknowledge that, particularly when it has been a question of supporting what we often call the black liberation struggle, that support has come from all over the planet, historically,” Davis said.

While Davis added that it is not enough to attend one demonstration or to simply “like” a cause on Facebook, she amended that people can’t try to tackle changing everything at once, and change doesn’t happen instantly.

“Let’s think about impact rather than outcome,” Davis said.

Among the students, faculty, and alumni was Boston City Councilor Charles Yancey, who said he first heard Davis’ name as a Tufts student in 1969. Yancey wondered what challenges she would give students as well as those in office today.

Davis spoke of the excitement of being an activist in today’s world and new opportunities for learning.

“Our challenge is to listen to young people and take seriously the new imaginative approaches,” she said. “Be willing to follow their lead.”

President of the Black Student Organization (BSO) Sandy Fonseca Lopes, who campaigned and raised the funds to bring Davis to Simmons along with the BSO and also challenged the audience to ask themselves what they have done to end racial inequality and to talk and think more about social justice issues.

“I am so very proud of the history and legacy we are leaving at Simmons College,” Lopes said.