FINNEAS finishes his American solo tour at the House of Blues

This performance felt extra special, as FINNEAS informed the crowd it was the largest venue he has played as a solo artist thus far. 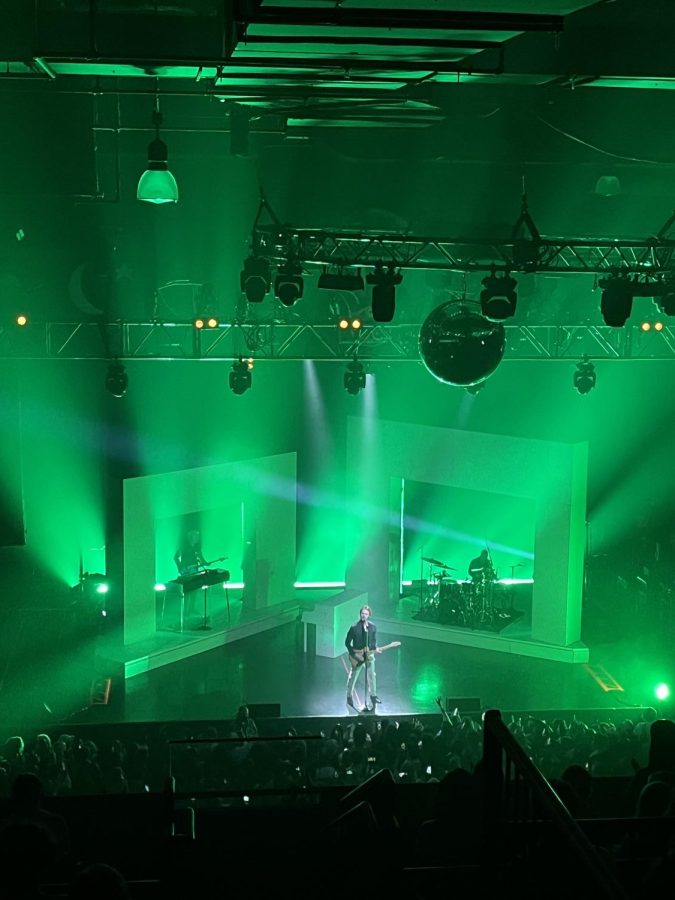 FINNEAS performing at the House of Blues on November 18. Photo by Julia Rush.

FINNEAS recently made the final stop of his American solo tour in House of Blues Boston, leaving fans buzzing with delight.

The House of Blues offers a unique experience for concert go-ers with just 1,800 seats.  The smaller crowd made the show intimate and it seemed very relaxed as you weren’t being deafened by tens of thousands of teenagers. This performance felt extra special, as FINNEAS informed the crowd it was the largest venue he has played as a solo artist thus far.

As my friend and I predicted, FINNEAS opened with the track “A Concert Six Months From Now” which was all too fitting as many people are experiencing their first concerts since the pandemic. The tune left our hearts throbbing thinking of the days in lockdown spent dreaming of live music.

He continued through his most popular tracks, bringing down the house with an ever-so sensual rendition of “Around My Neck”. FINNEAS laid on top of his piano, hair falling around his face, and crooned the line “teach me a lesson, take me over.” The moment truly brought the crowd to plead with FINNEAS to never leave the stage.

His custom upright piano looked a little like it was made of swiss cheese, as it was white and full of holes, but lights were set inside creating an ethereal glow. The effect was unique and added depth to the otherwise minimalist set.

While he hit us with all of his most upbeat songs, like “The Kids Are All Dying,” and  “The 90s,” he also sprinkled in just the right amount of sad tracks including a raw performance of  “Love is Pain,” leaving the audience silently dazed.

On his command, a disco ball was struck with light making the entire venue glitter to the track “How It Ends.”

Of course he closed on an upbeat note with his big hit “Let’s Fall in Love for the Night” which was an epic crowd pleaser.

So many of his lyrics feel raw and hearing them straight from his mouth was such a surreal experience. He’s not just singing about drugs and sex, he’s singing about the things that scare him and the intense, gnarly emotions that come along with those fears. The line “wish it wasn’t mandatory dying,” from “Love is Pain” highlights fears that have been elevated in the past two years with the stress of keeping loved ones safe becoming even more overwhelming.

The musicianship of this show was impressive with a bass player and drummer accompanying FINNEAS on stage grooving with him delightfully. Watching FINNEAS play guitar was a nice break from singers who just play filler rhythm chords. He added funky flair to each of his tracks and the ones he played on piano were spot on and absolutely stunning.

He directed the stage wonderfully and the show appeared seamless. The transitions were clean and the tech created a lovely viewing experience where the only thing you were worrying about was savoring each song. You had to do a bit of savoring considering his set was only an hour.

The overall atmosphere of the show was beautifully orchestrated and created a really lovely night of live music.