Three-time “GNAC Rookie of the Week” Conners put up an unbelievable 17 kills in 37 attempts,  for a kill percentage of .378. 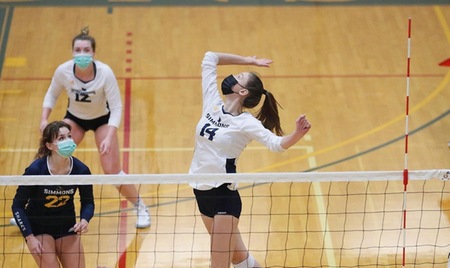 Three-time “GNAC Rookie of the Week” Conners put up an unbelievable 17 kills in 37 attempts,  for a kill percentage of .378.

Sophomore Jayla Parnell racked up 9 kills and 11.5 points, and senior Amanda Fortune had a banner performance with 5 kills and 7.5 points.

Lasell’s Mckenna McCool and Camila Lopez led their team with 13.5 and 10.5 points respectively.

The first set went to Simmons with a score of 25-12. Lassell rallied and edged out Simmons in the second, 25-22. Sharks came back with a vengeance in set three, winning 25-11. The next set went back to Lassell in an exciting 25-23. Simmons took the last set 15-6 on a seven-point run catalyzed by two service aces by Jordan Hacker.

The Sharks play third-seed Johnson and Wales University in the semi-finals at the Holmes Sports Center tonight at 7 pm. Free tee-shirts and pizza will be provided to all who attend.

The winner of tonight’s game will advance to the 2021 GNAC Championships.