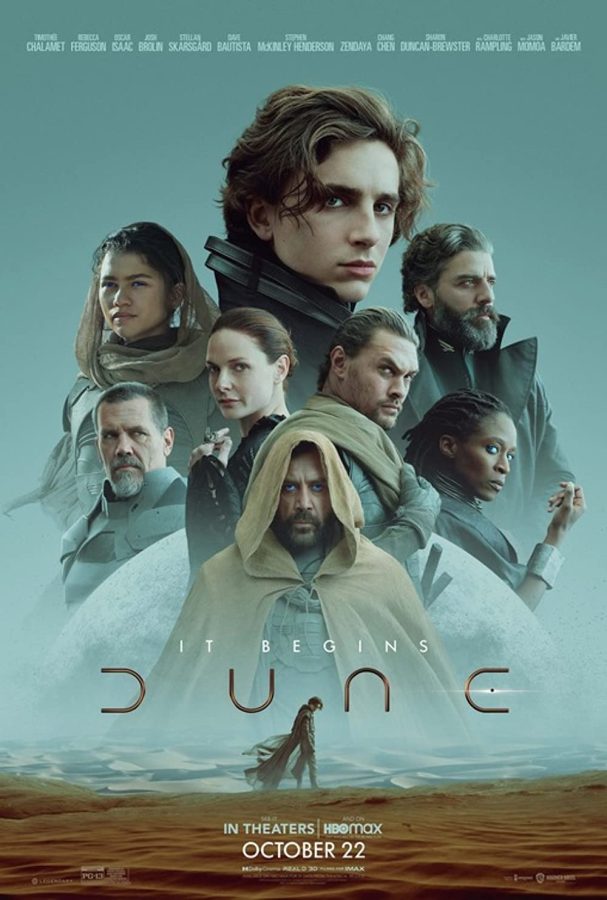 The very beginning of the Dune opens with text at the bottom of a black screen, reading “Dreams Are Messages From The Deep.” And that is what Dune is: a message from the deep, telling Hollywood to make more stunning, ethereal sci-fi.

Directed by Denis Villeneuve, the film follows Paul Atreides (Timothee Chalamet), a young man who is born into a great destiny, essentially fitting the “Chosen One” trope. It is the year 10,191 (about 20,000 years into the future) where human beings have settled on planets across the universe. With his family, the noble House Atreides, he must travel to Arrakis, the most dangerous planet in the universe. Arrakis is the only source of “spice,” a psychoactive drug that increases vitality and lifespan.

In addition to the expansive external conflict, the film deals with Paul’s intrapersonal conflict–– he has recurring and troubling visions of the future. He confides in his mother Jessica (Rebecca Ferguson) and his father’s aide Duncan (Jason Momoa) about these dreams, which grow more intense after Paul is exposed to “spice” in the air on Arrakis. Dreams and premonitions are just as important to the film’s plot as the beast-like sandworms that produce “spice.”

In recent years, the amount of remakes and sequels in the American movie industry has exhausted the moviegoing public. Villeneuve’s 2021 Dune is not the first film adaptation of Frank Herbert’s 1965 novel of the same name— David Lynch directed the first version in 1984. Dune could have vanished into the movie industry’s deep black hole of half-hearted remakes. However, the mystical aspects of the plot and the care the film was made with are ultimately what make it rise above.

Dreams, if we listen to what they tell us, can be a rich treasure unique to each individual. They can help us navigate our waking lives. Psychological studies have tried to examine the value of dreams, but at times, it is challenging to capture something so abstract. Art has a way of expressing feelings that can’t be measured. Dune does so by highlighting how powerful dreams are. Through Paul’s internal conflict with his dreams, he is warned of potential dangers in his future and he can work through his feelings about the treacherous environment around him. Personally, the theme of dreams was my favorite component of the film.

Herbert’s novel was born out of the Cold War era and environmental dread. Villeneuve’s remake handles this dread with care, drawing on the similarities these fears have to present day. The themes attached to this translate well onto the silver screen. Other aspects of the film, like Hans Zimmer’s sweeping score and the gorgeous, daring visuals, were crafted with precision that truly paid off. The end result of such effort is that viewers are absorbed into the universe of the film. While the modern-day world changes at a nauseatingly fast pace, nothing about this film felt rushed. As a novel writer, it was lovely to see a movie arranged with so much love and respect for the book.

The commercial success of Dune has inspired movie fans to hope that the wave of redundant sequel films is of the past. One Twitter user, Christina Tucker (@xtinatucker) wrote on the Monday following the film’s opening weekend that she hopes “studios realize that normal people do in fact have the brain capacity to watch well-made, fairly weird, serious” movies. The discussion the tweet prompted included wishes that major movie studios will branch out in what they produce next and how viewers have responded to past complex movies.

These conversations emphasize that the film has something for everyone. If none of the previously mentioned elements interest you, did I mention that the film also stars Zendaya?