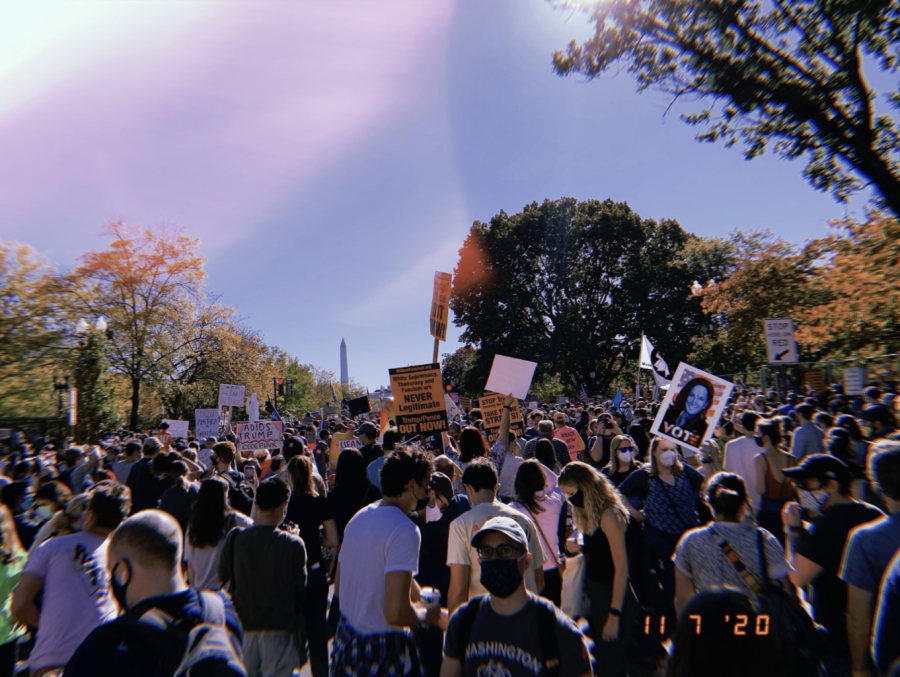 Photo of a D.C. crowd by Mieke Riddlebarger

Riddlebarger, an Ohio native spending the semester with their family in the D.C. area, woke to dozens of texts and missed calls from family and friends.

“I checked several different news sources cause I was scared only one had called it,’ said Riddlebarger, “and eventually sunk into that realization–oh my god– I need to go to the White House.”

The 3+1 public policy student, also a first-time voter, made the 20 minute drive to the White House, where they passed hundreds of cars with windows down and music blaring. Live music, and crowds wielding champagne and homemade signs lined the streets of D.C.

In the distance, they spotted the now-infamous giant Trump baby balloon. Despite the crowds, Riddlebarger did not see any counter-protestors at the White House.

“Everyone was just very hopeful and excited that there was maybe going to be some change for once,” they said when asked about the attitude of the crowd.

Despite the joy and excitement of the moment, Biden was not Riddlebarger’s top choice–– they are still enthusiastic about his election, though,  they find it difficult to connect with older candidates that they feel they have little in common with.

“In 2024 I would really hope that we have younger candidates that actually reflect the diversity across America and what America actually is,” they said.