The top three SNL cold opens from this election cycle 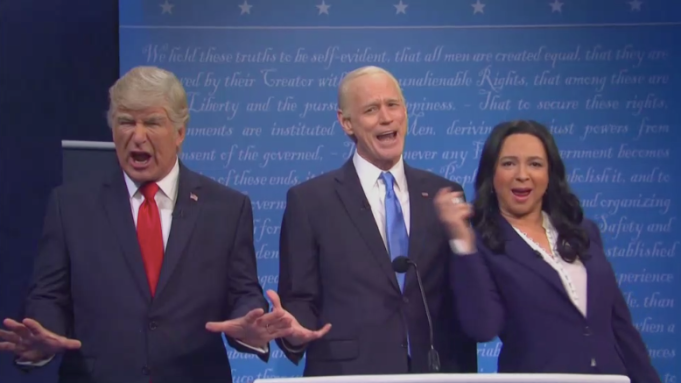 If there’s one thing Americans can count on, it’s SNL. Through good times and bad, Lorne Michaels’ Saturday satire has always lifted our spirits, and this election season is no different. Here are this year’s cold opens covering the upcoming election, ranked.

I remember that there was a time when I found Alec Baldwin’s Donald Trump extremely entertaining. That time, it seems, has passed long ago, much like the time since Trump’s last negative covid test. Baldwin and Jim Carrey as Joe Biden each had their moments of course, my personal favorite being Baldwin’s “LGBTQ-Anon.” When asked about global warming, Baldwin said, “Wind kills all the birds… chops ‘em up like a magic bullet,” which honestly may be a direct Trump quote. I couldn’t help but root for Double-Take Joe, but not quite as much as I rooted for the skit to just end. As Carrey said, “There’s only two things I do: kick ass and take trains. And I don’t see any trains in sight.” I hope he gets to that ass kicking fast so we can get back to staring at Colin Jost.

This one gets brownie points just for featuring Kate McKinnon as “surprise badass” Savannah Guthrie. Queen McKinnon’s matter-of-fact delivery was appropriate both to the mood of the town hall itself and to the mocking nature of the skit. McKinnon began with “tearing [him] a new one,” and concluded the town hall with a Wrestle Mania style physical fight, bringing to fruition every liberal’s wildest dreams. Jim Carrey’s portrayal of Joe Biden was largely forgettable, barring his stirring rendition of “Won’t You Be My Neighbor?” comparing Sleepy Joe to America’s Sweetheart Mr. Rogers. The only thing I can really knock this skit for is Carrey’s TikTok dance joke, which came off more forced and uncomfortable than funny and uncomfortable.

A true masterpiece. Except for the very end. Gross. I’ve got to tell you, Beck Bennett and Maya Rudolph as Mike Pence and Kamala Harris were a welcome change from their costar’s portrayals of the presidential candidates. Bennet really pulled out some hard hitters, but Rudolph stole the show with her “Claire Huxtable side eye,” and had me absolutely rolling every time she said “Jahbiden.” Oh and one more thing–– the fly on Pence’s head was Joe Biden. Brilliant.