What it was like to vote in the 2020 presidential election 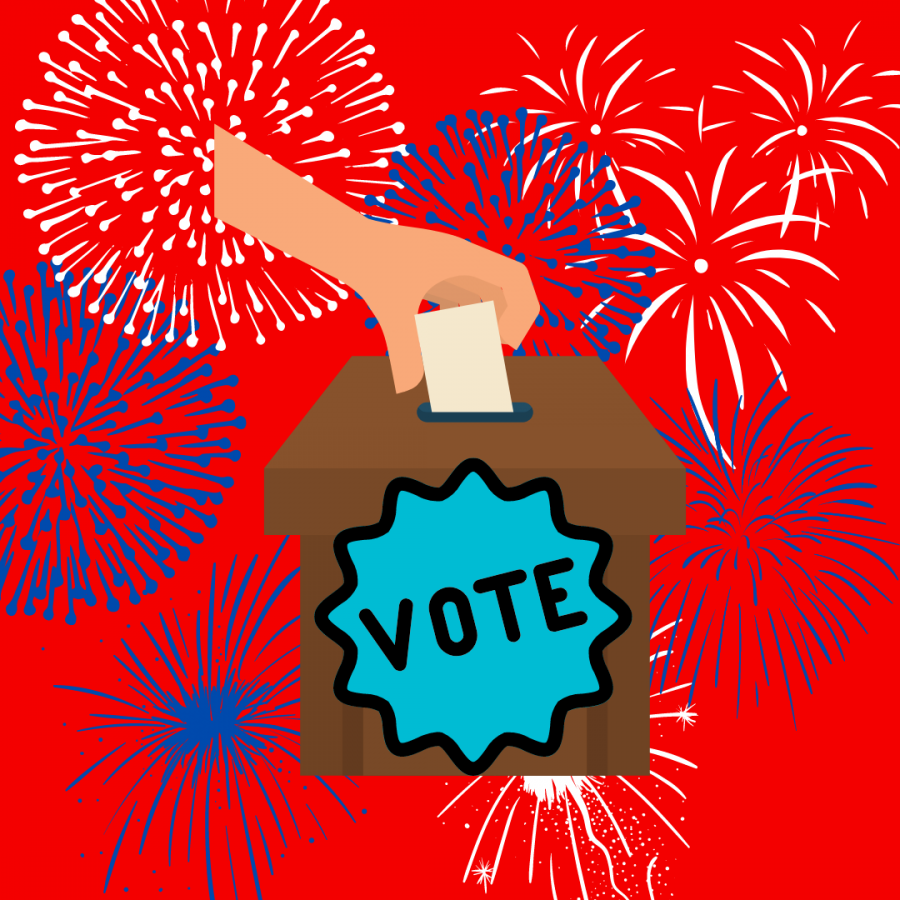 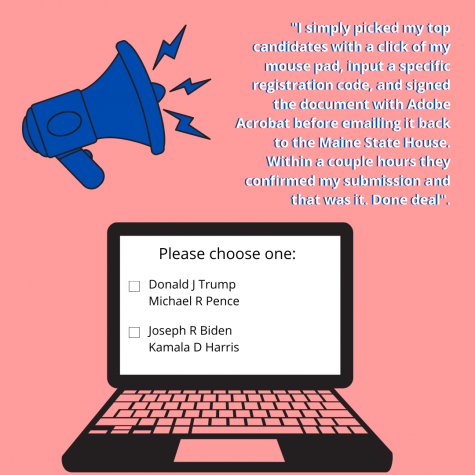 Helen Ruhlin is a senior Journalism student and the Op/Ed editor of the Voice.

As I clicked on the tiny bubble next to Joseph Biden’s name, effectively locking in my presidential selection, one phrase crossed my mind with two different tones:

Sure I’m grateful and proud to have cast my political opinion, but I’d be lying if I said the experience felt much other than vastly underwhelming. I’m a late 90s baby meaning I’ve spent the last two decades in envy of those who took to the voting booths. Each fourth November and “I Voted” sticker I saw felt like a blatant reminder of the exclusive political realm that separated me from adult-aged America.

I have never been the most politically informed in the room. In fact, I’m a pretty poor excuse for a Gen Z journalism major. I watch a minimal amount of news broadcasts, hardly take the time to research politicians, and still struggle to grasp the electoral college system. Yet voting has always been this weirdly ultimate goal of mine. One needn’t achieve anything more than 18 years of life in order to gain the privilege––or at least in theory (voter suppression and discrimination is a real thing, people!). But I digress, something about the concept as a whole intrigued me. I loved the idea of going to my local town hall, checking in with one of the old folks who probably taught me third-grade math, and eventually making my way into the old-school, wooden voting boxes to etch my opinions and preferences into a sheet of paper.

Needless to say, when I pictured finally voting in the 2020 election––the image that came to mind was a bit different than what I got.

I’m from Maine, but recently moved to Vermont which made an early, online absentee ballot the perfect fit. Maine––which recently adopted ranked-choice voting––graciously sent me my ballot as a pdf via email with some basic instructions. The process couldn’t have been simpler. I simply picked my top candidates with a click of my mouse pad, input a specific registration code, and signed the document with Adobe Acrobat before emailing it back to the Maine State House. Within a couple hours they confirmed my submission and that was it. Done deal. No stickers, no lines of people anxious to get in and out of the polling area, but most definitely no satisfaction of delivering my ballot by hand.

Not only did my vote look different, it felt different too.

This election (and 2020 in general for that matter) has obviously strayed from the norm, but never in my wildest pandemic dreams had I anticipated such a hostile presidential race. I’m not naive to the reality of less-than-ideal nominees, I know there are no perfect candidates. But if you told my 13-year-old self that my first legal vote would be between two white guys in their seventies with varying degrees of cringe and criminality, I’d have called you a fool.

My experience itself may have lacked the excitement and sense of action one derives from an in-person vote, but I think there’s something to be said for the convenience of early voting during such a bizarre year. Like all solutions that have resulted from COVID-19-related obstacles, the 2020 voting process is not a perfect nor permanent answer. It has its drawbacks and there’s a level of uncertainty that inevitably goes along with handing off your ballot to the unknown.

Voting nowadays may not be glamorous, but it undeniably provides a safe and facilitated way for ballots to reach the masses. 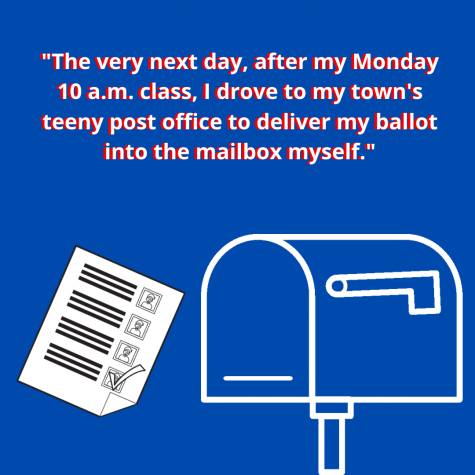 Sarah Carlon is a senior History and Journalism student and the Editor-in-Chief of the Voice.

The very first thing I did on my 18th birthday was register to vote. I turned 18 in August of 2018, and, like many my age, the 2016 presidential election was a rude wake-up call. It seemed more important then than ever to make sure my voice was heard through my vote, and I eagerly hopped on my laptop, (after a birthday coffee, of course,) to register to vote.

After being bombarded with stories this summer about all the mishaps involved with mail-in voting, (ballots being mailed to the wrong addresses, ballots for the primary elections instead of the general elections being mailed out, folks missing registration deadlines or ballot request deadlines,) I was more than worried about my ability to vote in this election. I am registered to vote in my hometown, Barnstable, MA, but I am living in Western Massachusetts this semester. If I didn’t get my ballot, would I have to drive all the way home to vote in-person? Am I comfortable voting in person?

I filled out the paperwork requesting my mail-in ballot in August, and although I requested my ballot to be sent to my address here in Shutesbury, my ballot was sent to my parents house. Luckily, my dad was able to mail it out as soon as they got it, and last week, I opened my mailbox to my first ever presidential ballot. I wish I could say I was more excited to vote, but I think this is a year full of concessions, and I was just happy that my ballot made it out here.

I voted in my first presidential election at my kitchen table after my schoolwork was done for the day. Thrilling stuff, right?

The very next day, after my Monday 10 a.m. class, I drove to my town’s teeny post office to deliver my ballot into the mailbox myself.

Standing in front of the mailbox, I hesitated. This year has damn near sucked my enthusiasm dry, but there is something to be said for voting. I’m working on an exhibit with my advisor this year about Simmons’ place in the suffrage movement, because it’s the centennial anniversary of women getting the vote. I thought of suffragists like Ida B Wells, Charlotte Perkins Gilman, Alice Stone Blackwell, Mary Church Terrell, and the countless other women who fought for their voices to be heard. I thought of the Simmons students and even the first dean of Simmons, Sarah Louise Arnold, who, despite pushback from their peers, professors, families, and a big chunk of the nation writ large, fought for their right to vote. We are so removed from the suffrage movement that checking boxes on a ballot has turned into a chore instead of a revolutionary act.

I put my envelope into the slot and said a prayer that it would reach the Barnstable town clerk’s office as soon as possible.

And look: I’m not here to shame people who aren’t voting, and I’m not here to laude the suffrage movement like it was without its faults. History is messy, and political action is nuanced. Voter disenfranchisement is something that is still alive and well in the US, and for those who have had generation after generation experience it, I completely understand why they maybe wouldn’t vo

I am a very different person than when I turned 18. I have lost a lot of faith in our political systems, and the ability for my vote/elections to bring about change. However, I have also seen the strength that a community can bring, and how to look out for those who need it most. Voting is not and should not be the end-all-be-all of one’s political engagement, but it is certainly a great place to start.