Harris and Pence faced off at last night’s VP debate 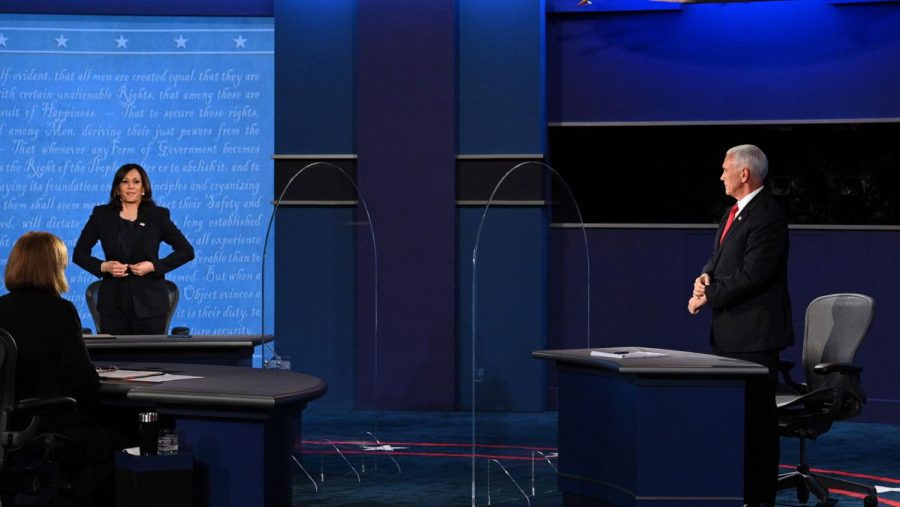 Having been given only eight days to recover from last week’s presidential debate, Americans tuned into the first and only 2020 Vice Presidential Debate on Wednesday night, October 7.

Vice President Mike Pence and Senator Kamala Harris debated at The University of Utah’s Kingsbury Hall in Salt Lake City, separated by plexiglass panels and distanced 12 feet apart out of an abundance of caution, and in light of the president’s recent COVID-19 diagnosis and spread.

Moderator Susan Page, current Washington Bureau Chief for USA Today, was clear from the beginning that she had the intention of leading a debate much more civil than the presidential debate, citing that America“deserves” a civil debate free of undue interruption or crosstalk.

The debate was divided into nine sections at 10 minutes each, with segment topics ranging from the pandemic and systemic racism, to the Supreme Court and the role of the office of the Vice President in the context of Trump and Biden’s advanced ages. Moderator Page started each section by saying, “You have two minutes to respond, without interruption.”

The air of civility did not exclude the candidate’s from issuing scathing critiques of one another’s policies. During the night’s first section, which was focused on the COVID-19 pandemic, Senator Harris called the Trump administration’s pandemic response “the greatest failure of a presidential administration in our nation’s history.” The Senator’s comment bears especially notable weight, as Pence is the administration’s Head of the Coronavirus Task Force.

Senator Harris took every chance she could to look straight into the camera and directly address Americans at home, and had to ask Vice President Pence to stop speaking over her. Her approach was to defend Joe Biden’s policy plans and integrity when appropriate, but she was clearly issuing a referendum on the Trump administration.

Pence defended Trump at every turn, especially his COVID-19 response after Senator Harris’s condemnation, claiming that “one life lost is too many,” and that the president has put American lives first “since day one.” Pence also repeatedly went over his allotted time, causing Moderator Page to say “thank you, Mr. Vice President” to cue that his time had elapsed 22 times, to no effect.

The presence of a female moderator in addition to a female candidate of color made the gender politics of the evening especially interesting.

ABC News coverage immediately following the debate chose no clear winner, instead noting that despite the air of civility, many questions were not definitively answered by either candidate. Pence stumbled over his answers on race relations, and Harris was not quick to directly answer questions regarding Biden’s age. Highlights and fact checking information can be found here, as we await round two: the next presidential debate.