Virtual send-off for the Class of 2020 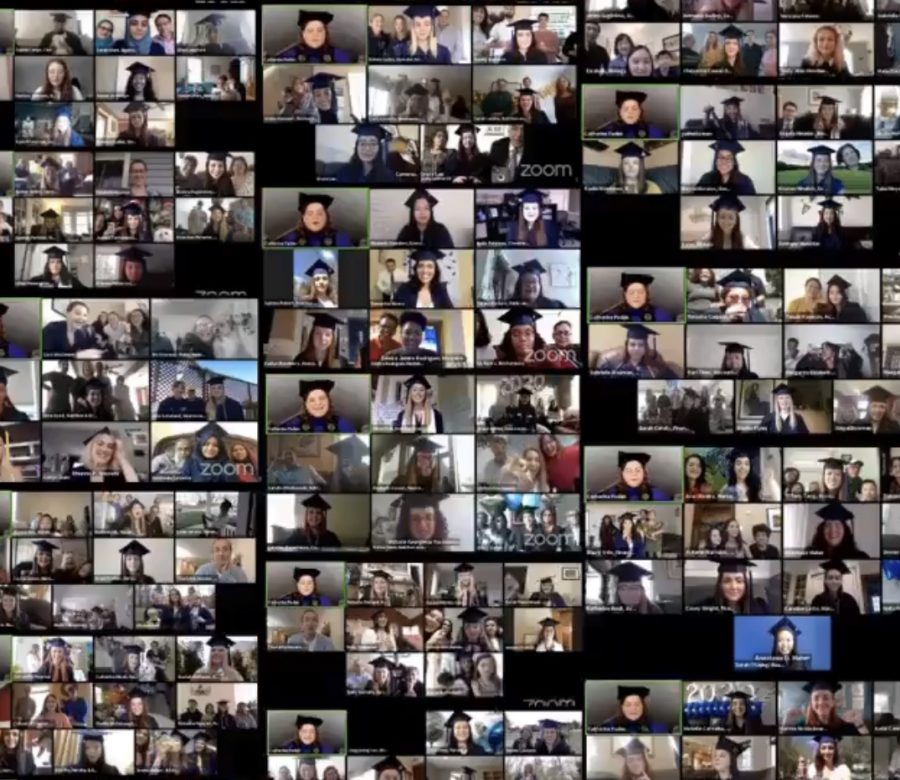 Photo of the Class of 2020, courtesy of @SimmonsUniversity on Instagram.

On May 15, Simmons University held its first ever virtual commencement ceremony to celebrate the Class of 2020 after having to cancel  the in-person event due to COVID-19.

Despite the ceremony being virtual, Emma Mouradian ‘20, BA in English Literature, felt the love from her Simmons community.

“The past week had been a mix of sad and happy, and even though we weren’t in the Seaport, I felt surrounded by a community that I had gotten to love for the last four year,” Mouradian told the Voice. “Simmons, with all of its faults, is a place many of us call home.”

The virtual ceremony was held live on Zoom but broadcasted live on Youtube, and began at 9 a.m. EST. Around 40 minutes into the ceremony,, technical difficulties began. Graduates weren’t able to be seen as their names were called, according to Professor Leanne Doherty, professor and chair of the Political Science and International Relations department. To fix the problem, the University restarted the Youtube stream.

Professor Doherty noted that she was able to see more students in the virtual format than she would have otherwise sitting on stage, and applauded Professor Randi Lite, Biology professor and the director of Exercise Science, for her speech to the seniors.

“I thought it was great,” Professor Doherty said in an email about the ceremony. “Professor Randi Lite gave an inspiring, beautiful speech in the morning. About the power of counting– it was so calming and thoughtful.”

When Lilli Thorne ‘20, BA in Political Science and History, first learned that commencement was going virtual, she said she was “livid.” Not because it wouldn’t be happening on May 15, which she recognized would have been “unsafe, irresponsible, and impossible,” but rather because a postponement of the in-person ceremony would not be an option.

“I just wanted an ‘I see you’ message and we didn’t get that,” Thorne said in an email. “It felt almost insulting for the original email to claim that virtual graduation would be meaningful in the way an in-person ceremony is.”

Thorne originally wasn’t going to attend the May 15 virtual ceremony, but decided to at the request of her family.

And she was glad she did.

“Virtual graduation was, I think, as fulfilling as it possibly could be. After commencement day, I’m feeling a sense of peace that I wasn’t expecting. A feeling that nothing really matters, but in a good way? I think it granted me a sense of closure I didn’t think was possible from a virtual experience,” Thorne said.

On the other hand, some seniors opted out of attending the virtual ceremony. Caroline Smith ‘20, BA in Journalism and Public Relations Marketing Communications and secretary of the Class of 2020’s Class Council, is one such student.

“I also felt that the format which required students to join live and via video in order to have their names read was inaccessible and for me personally, it was anxiety inducing,” Smith explained. “These factors combined made the idea of participating more stressful and upsetting than not, so I decided to opt out and celebrate in my own way.”

Mackenzie Farkus ‘20, BA in Journalism and outgoing editor-in-chief of the Voice, attended the virtual ceremony, but echoed Smith’s disappointment.

“I have to give a little credit to Simmons, because coordinating a brand new graduation in a short time can be difficult,” Farkus said. “I definitely would have preferred an in-person commencement.”

Until commencement in 2021, it is unclear how many members of the Class of 2020 will choose to participate in the ceremony.

Thorne, while leaning towards attending the Class of 2021’s commencement mostly so her family can get the chance to see her walk across the stage, still thinks a shared commencement is a “horrible” idea.

She pointed out that both classes deserve “our own ceremonies and our own moments,” and that the ceremony will be extremely long due to the additional graduates.

“I don’t care that I have to wait, but I do think we deserve, at the very least, our own ceremony,” Thorne said.

Mouradian echoed this, planning on attending next year’s joint ceremony but wishing that Simmons had rescheduled commencement altogether as other Boston-based schools have, like MassArt, Tufts, and Emerson.

To view more of the Voice’s coverage of graduation 2020, click here.