Takeaways from the town hall

"[We] respect that employer/employee relationship, and to try to interfere with that relationship by inserting the elements of our own contract, goes beyond what I think is a proper thing to do. My point is I do not believe that is an ethical decision for Simmons to make." -President Helen Drinan on whether Simmons should leverage their contract with Aramark to help secure workers' benefits. 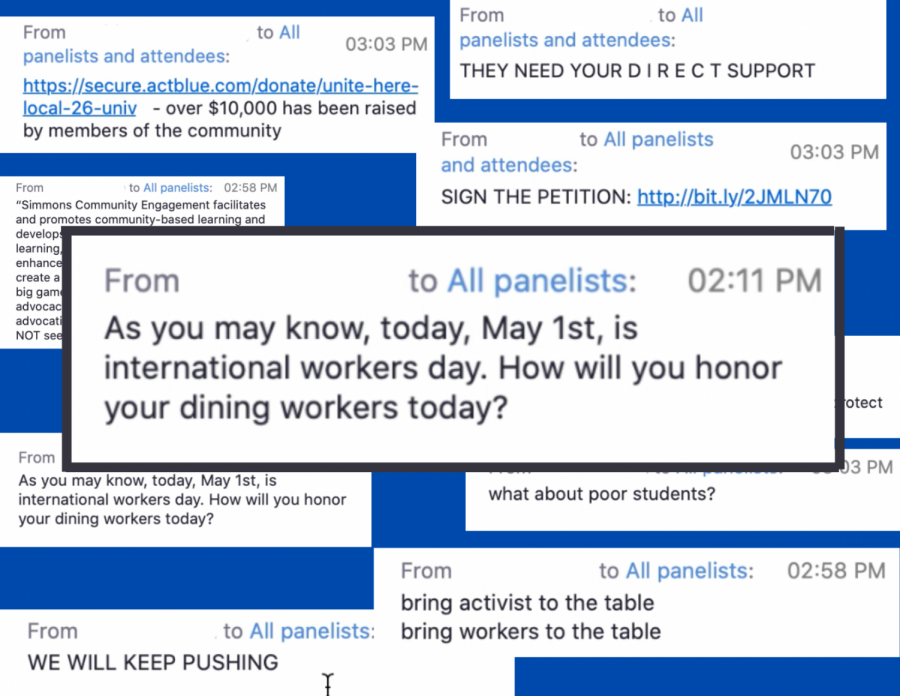 Some examples of student's thoughts throughout the town hall via chat.

The presentations were followed by a Q&A moderated by Isabelle Indelicato, staff writer for the Voice and Assistant General Manager for Simmons Radio: The Shark.

Topics ranged from student mental health, to how the fall semester will look, to support for Simmons dining workers.

Here are some of our key takeaways from the event:

Last week of April saw the first round of layoffs, with 12 staff members let go.  President Drinan said she is anticipating at least two more rounds of cuts, with 50-75 more people laid off or furloughed.
According to Provost Katie Conboy, student course evaluations of professors will not be used to determine future layoffs.
Provost Conboy said Simmons is considering many options for the fall semester, including having some students on campus and some learning online, some courses online and some courses in person on campus, or having everyone learn online.
Provost Conboy also said the university is considering tuition reductions if the university would have to have online classes in the fall semester.
Drinan said that incoming president Dr. Lynn Perry Wooten will be the one to decide whether Simmons will be online in the fall semester or back on campus. Dr. Perry Wooten takes over the role of University President on July 1.
Brink-Pisinski said the university remains on track with the One Simmons Project, the first phase of construction is set to begin as planned on May 18.

On the dining workers:

The contract Simmons has with Aramark, which was set to expire July 1st, has been extended one year, said Brink Pisinski.
President Drinan said she will not leverage Simmons’ contract with Aramark to force Aramark to pay dining staff. Drinan said it “would not be an ethical decision,” to interfere with the employee/employer relationship Aramark has with its workers.
President Drinan said Simmons can not legally withdraw more funds from Simmons’ endowment to pay the wage of Simmons dining workers. Endowment money is donated and has to follow strict guidelines on what it can be spent on, as well as where and when it can be accessed. It would require an act by Massachusetts Attorney General Maura Healey to take out more money.
Simmons cannot use the loan taken out for the One Simmons Project to help pay for anything other than the Project, including paying dining workers. The funds for One Simmons have already been allocated for the project, and cannot be diverted elsewhere.