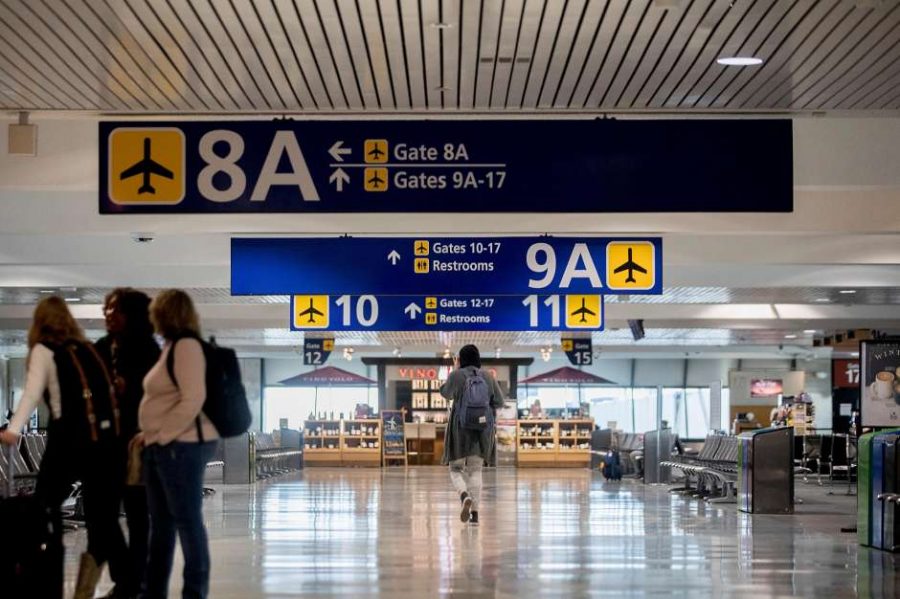 Photo by Jessica Christian of the San Francisco Chronicle

Instead of spending their birthday weekend with their two best friends in Paris, third-year English and French major Charlie Sinotte was packing for the next flight back to the U.S.

“Getting the email that I had to make plans to head home was the worst birthday present,” Sinotte said. “It was really disorienting to wake up and see messages from family, friends studying abroad, and even my friends who were going to come visit that same day all saying either ‘come home’ or ‘I’m going home.’”

It was unclear at first whether Americans traveling in Europe would be included in this ban, but it was soon clarified that citizens and permanent residents were not subject to the restrictions.

Suddenly, Simmons students abroad in Europe this semester found themselves halfway across the world in the midst of a global pandemic.

“My program contacted us a while after the ban was announced on Thursday afternoon, telling us that the program was cancelled, and we should make arrangements to go back to the U.S.,” Abi Powers, a third-year Economics and International Relations major studying in Bordeaux, France said. “I couldn’t find a flight out until Wednesday but most people are leaving much sooner than that.”

“I’m honestly a little angry at the cancelation of the program. I got a week’s notice I had to leave Russia,” Tyknov said. “It’s just as safe in Russia, if not safer, and I won’t be stuck in a confined space if I didn’t have to fly back.”

Tyknov, a third-year, was planning on graduating at the end of this semester. As her plans have changed dramatically, she said she will try to get a job and finish the incomplete credits once back in the US.

“I’m going to miss the freedom and my relatives when I leave Russia, along with all the friends I made here in the short time I was here,” Tyknov told the Voice.

Much like other students abroad, fourth-year Communications major Lauren Kaye, studying in London, England, heard about the travel ban soon after it was announced.

Kaye found out through a Twitter alert and despite being upset by the news, was not surprised as she saw more and more cases of COVID-19 being reported across Europe. Although Kaye’s program has not officially cancelled classes, Kaye booked a flight home once she found out about the ban.

“London had just started feeling like a second home. I had a community, I knew the city well, and my courses were just starting to focus on our final assignments,” Kaye said. “There’s so much I’m going to miss, and I’ll wonder about what memories would have been made in the 2 months I was supposed to still be there.”

In regards to Simmons supporting their students abroad, for Sinotte, the university had efficient communication during the chaotic situation.

“I’ve received multiple emails about the situation. They had a pretty quick response time, especially to the travel ban,” Sinotte said.

“Simmons has offered to pay for our flights home which I think is really great and a bit unexpected,” she said. “The study abroad office has been really great in communicating updates to me. I emailed them at 2 AM that I was coming home and received a personalized response almost immediately.

Powers discussed the feeling of limbo many Simmons students experienced while waiting to know whether classes would be cancelled for the remainder of the semester, but also noted that Simmons will be helping students abroad return home.

“From the study abroad side of things, The CGE confirmed that they are committed to helping me finish out coursework and would support me with paying for an early return trip which was really helpful,” Powers said.

After flying home, Powers and her family are going to self-quarantine for 14 days, per Center for Disease Control (CDC) guidelines.

Sinotte plans to self-quarantine as well, and urges others who are returning home from high-risk areas to do the same.

“Even if you think that you’ll be fine because you’re young and healthy, remember that you could pass it on to someone who is more vulnerable,” Sinotte said.