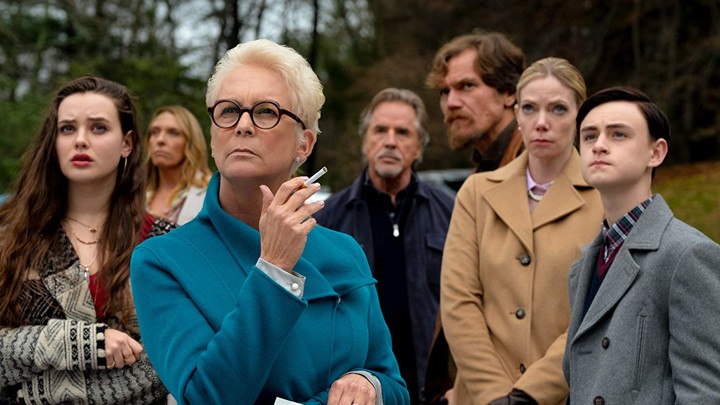 Rian Johnson’s 2019 murder mystery film Knives Out has something for everyone. Think the best game of Clue you’ve ever played, surprisingly apt social commentary, Gen Z humor, and Hercule Poirot if he was from the deep South– you’ve got Knives Out.

Also, Chris Evans in an Irish sweater; something for everyone!

The movie follows the Thrombeys: a family who have gathered at the home of the Thrombey patriarch, Harlan (Christopher Plummer), after he was discovered dead with his throat slit, in his study, the morning after his 85th birthday party. Detective Lieutenant Elliot (Lakeith Stanfield) and Trooper Wagner (Noah Segan) are interviewing the family about Harlan’s death despite Elliot’s insistence that it was a suicide. Harlan, who “started out with a rusty Smith-Corona” according to his son-in-law Richard (Don Johnson), became one of the best-selling mystery authors of all time. (Quick side note for anyone reading who like myself was born after the invention of the word processor– a Smith-Corona is a typewriter. Yes, I had to Google that.)

Linda Drysdale (Jamie Lee Curtis), Harlan’s eldest child, is a Boston real estate mogul who runs her company alongside her husband, Richard. Joni Thrombey (Toni Collette) is the widow of Harlan’s second-eldest child Neil, and remains very close to the family. Walt Thrombey (Michael Shannon) is the youngest and he runs the printing company that publishes Harlan’s books.

Benoit Blanc (Daniel Craig), a famous private detective, sits silently in the background of the interview, interrupting occasionally with an ominous piano thunk.

Harlan’s nurse, Marta Cabrera (Ana de Armas), is called to the house with the family to be interviewed by the police. Marta was close to Harlan in the months leading up to his death– she provided medical care to Harlan, but as she put it to Blanc, he also really needed a friend.

Throughout the interview, it becomes clear that all of Harlan’s children relied heavily on him to support their lifestyles. Walt’s career is running his father’s publishing company; Joni gets a monthly allowance from Harlan, along with him paying her daughter Meg’s tuition; despite Linda’s claims that she built her real estate empire from the ground up, it is revealed later that she was able to start her business thanks to money lent to her by Harlan. Even Richard, who Linda emphatically points out is not the boss of the real estate company they run, owes a debt to Harlan: he discovered that Richard is cheating on Linda, and is threatening to tell her if Richard refuses. Ransom, played by Chris Evans, is Linda and Richard’s son and the black sheep of the family. He was told by Harlan on the night of the party that he was being cut out of the will and would have to support his debonair lifestyle by his own means.

All of the children tell a much different story of the birthday party than what actually happened and in typical upper-crust fashion, every family member tells Lieutenant Elliot that they don’t air their private family matters in the open before immediately trashing everyone to the investigators. The reality is, Harlan cut off every single one of them from his fortune. It is this reason, along with a mysterious unmarked envelope mailed to Blanc filled only with money and Harlan’s obituary, that Blanc declares in a wonderfully campy Southern drawl: he suspects foul play.

At this point in the movie, I thought I knew how it was going to end.

But in fact, I was wrong. I was wrong several times. I had working theories as to who the culprit was that progressed throughout the movie and I was wrong about every single one of them. And for the record, I am that person you know who watches crime shows, true or otherwise, like it’s their job– I am practically Nancy Drew.

This speaks to the very nature of Knives Out. It’s a fresh take on the classic murder mystery whodunit, especially for a genre that has been as adapted as this one. It isn’t cliched or cartoonish. It is a fast-paced, witty story with unique characters that masterfully blends together a thrilling mystery with dry and dark comedy.

The humor is blink-and-you-miss-it hilarious. From Walt’s son, who is described by his father as “political” and by his aunt Joni as a “literal Nazi,” Jacob’s verbal sparring with his cousin Meg, to Ransom dubbing Blanc as CSI: KFC, to Marta’s inability to lie without puking, Knives Out was the comedy I did not see coming.

Another aspect of the movie that took me by surprise was the biting social commentary. Joni, a vegan who owns a skincare brand that is more of a “lifestyle” than a brand (her words, not mine), gets into a heated argument with Richard over the current President at Harlan’s birthday party. Richard claims that the president is the only one standing up to their disappearing culture while Joni counters that he’s “literally putting children in cages.” They don’t name names but take a wild guess who they’re talking about. However, for all of Joni’s grandstanding, when the will is read and it is revealed all of Harlan’s fortune, assets, and even the house is going to Marta instead of his children, she turns just as viciously on Marta as the rest of the family– even going as far as to blackmail Marta with her mother’s undocumented status into renouncing the inheritance. It was here that perhaps my hottest take struck my brain lightning-bolt style: this movie somehow manages to be a murder mystery and a damning indictment of wealthy Massachusetts liberals.

I went into the theater excited to see Knives Out because there is little I enjoy more in this life than a good mystery. What I got was a movie that exceeded every expectation I had; not only a fantastic murder mystery with plot-twists that won’t quit but a darkly hilarious and politically relevant story as well.

Also, did I mention Chris Evans in an Irish sweater?