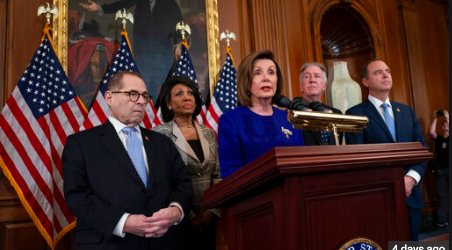 Weeks of fiery testimony has finally come to a close, and House Democratic leadership announced Tuesday the official decision to bring forward two articles of impeachment against President Donald Trump: abuse of power and obstruction of Congress.

After the House Judiciary Committee finalizes the resolution, it will be brought before the entire House to vote on. If the Democrat-majority House passes the articles, the Republican-majority Senate will hold a trial to decide whether or not to impeach the President.

“On this solemn day, I recall that the first order of business for members of Congress is the solemn ask to take an oath to protect and defend the Constitution of the United States,” Speaker of the House Nancy Pelosi started off the conference with. “With great respect and gratitude that I thank the Chairs of the committee, the six committees, that has been working to help honor our oath of office.”

The first of the two articles being brought against President Trump is abuse of power. The impeachment resolution cited President Trump’s now-fabled phone call with Ukraine President Volodymyr Zelensky back in April. Democrats allege that Trump pressured Zelensky to open an investigation into his political rival, Joe Biden’s son, Hunter Biden’s, dealings with Barisma Holdings, a Ukrainian natural gas company; the President would withhold military aid to Ukraine until they investigated Biden. In doing this, Democrats are arguing that Trump used his position as President to hurt Biden’s campaign, effectively influencing the 2020 election.

“Using the powers of his high office, President Trump solicited the interference of a foreign government, Ukraine, in the 2020 United States Presidential election. He did so through a scheme or course of conduct that included soliciting the Government of Ukraine to publicly announce investigations that would benefit his reelection, harm the election prospects of a political opponent, and influence the 2020 United States Presidential election to his advantage,” the articles of impeachment read. “…President Trump used the powers of the Presidency in a manner that compromised the national security of the United States and undermined the integrity of the United States democratic process. He thus ignored and injured the interests of the Nation.”

Another key element of Article I of impeachment, abuse of power, is the fact that Trump is claiming that Russia did not interfere with the 2016 Presidential election, but Ukraine. This theory, which has been proven false by current FBI Director Chris Wray, ties to Trump’s abuse of power for personal gain in regard to his connections to Vladimir Putin and business operations in Russia.

Fiona Hill, an American foreign affairs specialist and former U.S. National Security Council official in Russian and European affairs, testified in the November hearings and explained the danger in perpetuating this theory.

“Based on questions and statements I have heard, some of you on this committee appears to believe that Russia and its security services did not conduct a campaign against our country — and that perhaps, somehow, for some reason, Ukraine did,” Hill said. “This is a fictional narrative that has been perpetrated and propagated by the Russian security services themselves.”

The second article being brought forward is obstruction of Congress, based on Trump’s direction to many White House officials to defy subpoenas given by the House committees investigating the whistleblower’s complaint. Trump also directed members of his staff, including John Michael “Mick” Mulvaney, Robert B. Blair, John A. Eisenberg, Michael Ellis, Preston Wells Griffith, Russell T. Vought, Michael Duffey, Brian McCormack, and T. Ulrich Brechbuhl, not to testify in front of the House during the hearings.

“The House of Representatives has engaged in an impeachment inquiry…As part of this impeachment inquiry, the Committees undertaking the investigation served subpoenas seeking documents and testimony deemed vital to the inquiry from various Executive Branch agencies and offices, and current and former officials,” the text of Article II reads. “In response, without lawful cause or excuse, President Trump directed Executive Branch agencies, offices, and officials not to comply with those subpoenas. President Trump thus interposed the powers of the Presidency against the lawful subpoenas of the House of Representatives…”

The House Judiciary Committee is expected to vote on the articles by the end of the week, but Senate Majority Leader Mitch McConnell (R-Kentucky), has said that the earliest the Senate would be able to hold the trial would be early January.

“I can’t imagine a scenario under which President Trump would be removed from office with 67 votes in the Senate,” McConnell told NBC News. “So, I don’t know how long senators will want to continue the trial, but I’m pretty confident at the end, it will not — impeachment will not lead to ouster.”

NBC also reported that McConnell has said that he will be holding the Senate trial six days per week in line with his party’s calls for a short trial. This makes it difficult, however, for the six Democrat Senators currently running for President, including Bernie Sanders and Elizabeth Warren, to make it to Iowa to campaign before the caucus in early February while also being present at the trial.

The length of the trial is also uncertain. Speaker of the House, Nancy Pelosi, (D-California) told CBS Face the Nation that she has “no idea” when the trial will end. It will certainly be a tumultuous few weeks ahead for the House and the Senate.