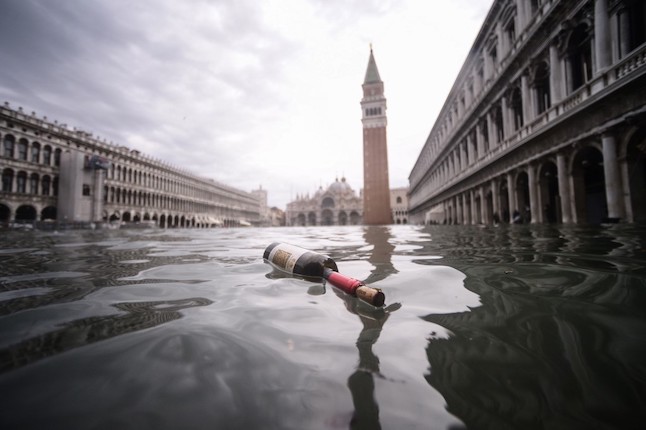 A general view shows a bottle of wine floating on the water of the flooded St. Mark's Square, with St. Mark's Basilica (Rear L) and the Bell Tower on November 15, 2019 in Venice, two days after the city suffered its highest tide in 50 years. - Flood-hit Venice was bracing for another exceptional high tide on November 15, as Italy declared a state of emergency for the UNESCO city where perilous deluges have caused millions of euros worth of damage. (Photo by Filippo MONTEFORTE / AFP)

In November, Venice experienced the highest levels of flooding in nearly 50 years, reaching 6 feet 1 inch. The floods caused massive amounts of damage to residences, businesses, cultural landmarks, and the city as a whole.

For large landmarks, such as St. Mark’s Basilica, the Italian Culture Ministry has sent experts in to assist with and assess the damage done by the flooding. But much of the damage repair on local residences and businesses is being done by volunteers. NPR reports that an American P.h.D. student doing research on textiles from the 19th and 20th centuries, Anna Dumont, is one such volunteer helping to salvage the library Querini Stampalia Foundation.

“So right now we’re taking books that are wet with saltwater and we are, page by page, putting paper towels in between the pages to soak up the water and hopefully save the books,” she told NPR.

Many local Venetians believe that a  1960s excavation project of city canals to accommodate oil tankers irreparably damaged Venice’s fragile lagoon ecosystem, which only worsened the effects of the flood and rapidly rising sea levels as a whole. The city has put into place a project called Mose, which aims to build floodgates for combating rising sea levels. But locals are skeptical as the project isn’t finished even now, 16 years after its inception, and are feeling generally ignored by the government.

“I have no faith in local or national governments to change anything,” said Pier Giorgio Vedovato, owner of a Venice watch dealership, told NBC. “The Mose investment was a waste of billions through corruption and mismanagement,” he added, referring to the sea barrier project.

Although flooding is a constant problem in Venice, it has worsened over the years, and experts suggest that it is only going to get worse. This could have a devastating impact on not just the city’s thriving tourist industry, but also the local populations who live there.

Many are quick to solely blame climate change for the flooding. But as Marshall Shepard, a senior contributor to Forbes explains in his November 16 article “Venice Flooding Reveals a Real Hoax About Climate Change — Framing It As An ‘Either/Or’” there are many forces impacting Venice that led to this historic flooding. Venice is sinking, and has been sinking for a long time– but climate change has definitely sped up the process.

“If I had a dollar for every comment that I hear about “climate changing naturally” or “hurricanes or floods always happening,” I could probably build a seawall. It is baffling to watch that narrative unfold because climate scientists are well-versed in the naturally-varying climate system and its associated processes,” Shepard wrote. “It stands to reason that we wouldn’t expect the climate system to function the same way when we are fundamentally altering the ‘river of air’ (the atmosphere) by changing its radiative processes with excessive greenhouse gases emissions.”