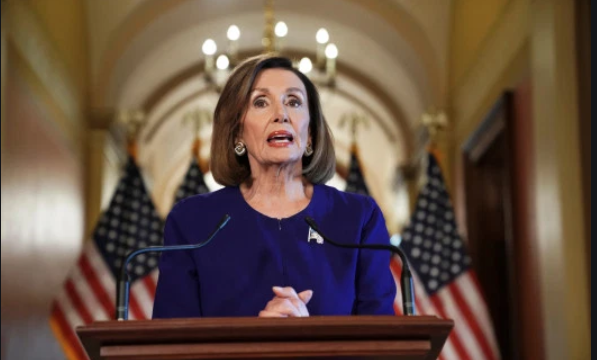 House Speaker Nancy Pelosi has announced that the House of Representatives will be moving forward with an official impeachment inquiry against President Trump.

“The actions taken to date by the President have seriously violated the Constitution–especially when the President says, ‘Article II says, I can do whatever I want.’” Pelosi said in a press conference on Tuesday. “The President must be held accountable. No one is above the law.”

This official announcement comes after a tumultuous week in Washington. In early August, a whistleblower from the U.S. intelligence community filed a complaint involving President Trump’s communication with a foreign leader.

The Washington Post reported that Intelligence Community Inspector General, Michael Atkinson, determined the complaint was credible enough to be considered a matter of “urgent concern.” But acting director of national intelligence Joseph Maguire refused to share the details of the complaint with Congress, which is a violation of the law.

The New York Times reported the White House Office of Legal Counsel has been involved to try to keep it from Congress. The conversation and foreign leader in question was a phone call between President Trump and Ukrainian President Volodymyr Zelensky in late July. The White House released an official memorandum of the conversation. It is noted on the document that a memorandum is not a verbatim transcript of the discussion, but rather a summary of the notes and recollections of witnesses to the conversation, who were Situation Room Duty Officers and NSC policy staff.

In the memorandum, President Trump appears to have urged President Zelensky to investigate 2020 Democratic presidential candidate and former Vice President, Joe Biden, and his son, Hunter, who served on the board of a prominent Ukrainian natural gas company until this year.

“There’s a lot of talk about Biden’s son, that Biden stopped the prosecution and a lot of people want to find out about that so whatever you can do with the Attorney General [William Barr] that would be great,” Trump said in the memorandum. “Biden went around bragging that he stopped the prosecution so if you can look into it…It sounds horrible to me.”

This exchange, and the fact that the White House is withholding the official whistleblower’s complaint from Congress, sparked outrage in the political community. Calls for the previously hesitant Democratic leadership to begin impeachment proceedings began to strengthen.

To impeach a federal official, the proceedings must be brought by a member of the House of Representatives. It is debated in the House, and if the articles of impeachment are passed through the House, they are presented to the Senate.

“They’re not going to impeach him, but I don’t think that matters. I think precedence matters,” junior Sangha Kang-Le said. “The Democrats [in the House] need to be on record saying they don’t approve of Trump’s behavior by passing it through the House, then let the Senate put on record that they do approve.”

“I think impeachment is the right thing to do, but I think it’s not really going to benefit the House. Also it’s really unlikely that any official impeachment proceedings will turn into a substantial ruling,” she said.

Senior Lex Cruz is also not confident in the ability of impeachment to pass through both the House and the Senate due to fierce party allegiances in Congress.

“Rather than looking at the actions of the individual, we are further dividing our nation with alliances that fall within the binary of which party you associate with,” Cruz said. “It’s unfortunate to say, but it allows political leaders even in the highest possible position, like our president, to be immune to being held accountable, and rather just gives a slap on the wrist time and time again.”

“Holding impeachment hearings for President Trump is the right step for Congress to take, and it has been for a while,” junior Eliot Stanton said. “While impeachment can feel like our last resort against a presidency marked by several scandals, it’s important to remember that no matter what happens, this is just one piece of the puzzle, only one of the ways in which we can hold all politicians, not just the president, accountable for their actions. So yes, I’m relieved that the Democrats are finally taking this step, but no, I won’t be placing all my eggs in the impeachment basket.”