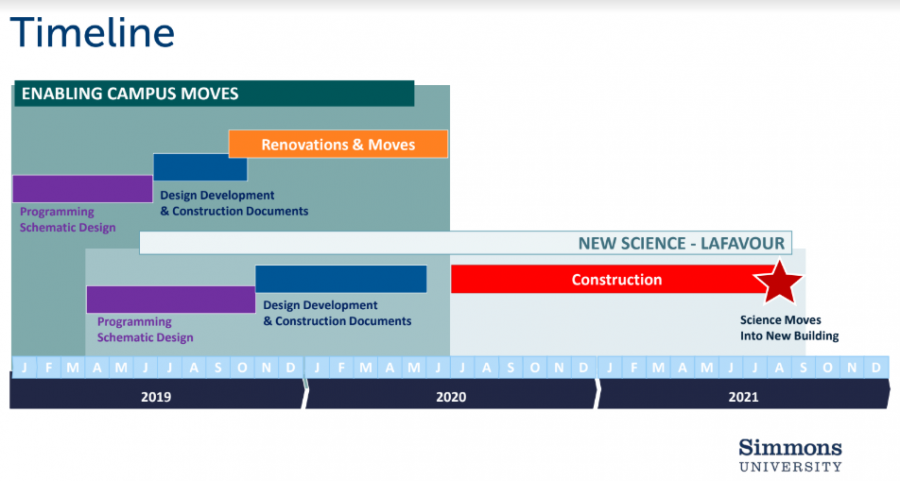 After weeks of rumors swirling around campus, Simmons University announced a comprehensive campus overhaul at a community meeting last Wednesday.

“We take huge responsibility thinking about you, it’s the reason we’re here,” Laura Brink Pisinski, chief of staff at Simmons, told the crowd. “We come to work everyday thinking how to make this institution better for you.”

The project, called One Simmons, will result in new science facilities throughout the Lefavour and Main College Buildings, as well as a “Living and Learning Center” which will act as the residence building for all students, with the current residence space at Pilgrim Road eventually being rented out.

“Rome wasn’t built in a day,” Pisinski said, and neither is One Simmons. The project has a five to eight year projected timeline split up into two phases.

Phase One, whose programming and schematic design and development is to begin immediately, includes enabling campus moves for those in Lefavour and the Main College Building. Construction on these buildings is set to begin in July of 2020 and the sciences are set to officially be in these buildings by August of 2021.

Phase Two, which won’t begin until after 2021, will include the transition of residences from Pilgrim Road to academic campus in the form of the Living and Learning Community, a high-rise apartment style building. The LLC will be built where Park Science is now and will house 1100 students, compared to the 1070 currently available on residence campus. While specific details on the LLC are not currently available, it is expected to have a new sports center, dining hall, and green space for students.

Phase One is projected to cost $71.6 million and Phase Two is projected at $11.4 million. Park Science, built in 1971, was the main building being addressed at the beginning of the project, but soon other possible improvements across both campuses were brought up.

“Creating modern science facilities were critical to us,” Pisinski explained. “The deferred maintenance on residence halls were showing, as well as in the athletics center and dining hall. Residence halls are not sufficiently meeting student needs. We wanted to create an innovative 24 hour living and learning campus.”

Students voiced their concerns at the community meetings, which included sustainability, gentrification, loss of residence community, accessibility, possible increase in fees, and lack of
student input in the decision.

Sustainability club representatives asked about the incorporation of sustainable practices in the new buildings, like greenhouses or the possibility of the LLC being a Net-Zero building, a building that gets its energy from renewable sources.

Pisinski said that while specifically a Net-Zero building hadn’t been discussed, other sustainability concerns were currently being explored. Among these possibilities are greenhouses and green spaces, updating sprinklers to lessen usage of flame retardant furniture, and the fact that the building will have a LEED Silver certification, the most widely used green building certification system in the world.

When gentrification was brought up, however, there were not many specific answers, as the leasing of the residence campus will likely not happen for five years.

“I was just wondering about gentrification in Boston and whether or not the leasing of res campus will aid that,” Simmons senior Lennox Orion said. “We should be having conversations with developers about what will happen with res campus and make sure we don’t displace the people already here.”

“We don’t know what will happen with res campus, as we [Simmons] have no control after the 99 year lease is signed, but we will be talking with developers about what should be prohibited from the space,” Pisinski said.

A concern on many Simmons student’s minds is accessibility, in the new buildings as well as the old, and Pisinski noted that accessibility is being emphasized in the planning process.

The new building will be including accessible doors, braille, and working elevators to aid differently abled students.

“None of the accessible door buttons work on res, and no matter how many work orders I put in, they still don’t work,” sophomore Lauren Wagner asked. “I get that this is a future plan, but what is being done right now to address the needs of our current students?”

Pisinski took notes on concerns about the current accessibility of res campus, including the accessible door buttons not working, expired certifications for elevators, lack of elevators in some buildings, and lack of braille in residences. She promised to bring the administration’s attention to the doors and elevator situations to try and fix them in the near future.

Sophomore Isabelle Indelicato brought up the active shooter threat that occurred on campus last fall, where many students in bigger classrooms or lecture theaters found they couldn’t lock the classroom from the inside.

“They recently renovated the Gwen Ifill college and it wasn’t a safe space for students to be during a lockdown,” Indelicato said. “And I was wondering what you’ve been doing to ensure these new spaces are safe, that doors lock and there aren’t glass panels that people can’t break through if someone is trying to cause harm.”

Pisinski noted that they are currently working to fix the security of classrooms, mentioning an assessment done last semester on all lockable spaces across campus and addressing ways in which to make campus safer, including making sure larger classrooms are able to lock.

“We want to work with the student population to try and find ways to make the LLC more welcoming and less like a high rise hotel,” Pisinski said.

The biggest objection to the One Simmons plan, specifically the LLC, is the loss of Simmons residence campus, which was and continues to be a big draw for prospective students looking at Simmons.

“I love res campus- it’s part of why I chose Simmons. I want modernized, accessible, and sustainable dorms, but I want them on res campus,” sophomore Eliot Stanton said.

“The community feeling of res campus is a big reason why I came to Simmons,” Hackey said.

Many students feel the same as Stanton and Hackey, and wonder why the residence campus has to be axed. Pisinski pointed out that the cost of fully renovating the entirety of res campus, including the athletics center and Bartol dining hall along with the dorms themselves, will cost more than it would to build the new LLC center, and will be more time consuming as well.

“In order to renovate everything, we’d have to do the renovations building by building, displacing people, and it would take over 10 years to complete,” Pisinski said. “It would be more expensive to renovate as well compared to building the Living and Learning Center.”

The price tag of One Simmons is another concern for students, who have just learned of a second tuition increase in two years, which will raise tuition to $40,850. While Pisinski assured students that they don’t expect another tuition increase as a result of the project, it’s hard for many students to justify the cost.

Starting in July, Simmons will be operating at a $1 million deficit, which wasn’t mentioned at the meeting.

“When I saw the $254 million [original projected cost of the project, One Simmons is now projected to be at about $83 million] I saw 30 students who could get their education here for free.” Orion said.

“I was upset to hear Pisinski say it’s not about the money to be made leasing res campus when that seems to be the only thing that couldn’t be achieved in updating dorms on res” Stanton said.

Another criticism students had about One Simmons was the lack of student input on the project as a whole. Pisinski referenced a 2015 study as well as yearly survey of each class on their opinions of Simmons and what changes they would like to see as a baseline for the project, but Stanton points out that current students only just learned about the changes last week.

“It was upsetting to hear claims that the proposed changes are for the students and in our best interest given that the proposal demonstrates a misunderstanding of what students want.” Stanton said.

Another community meeting will be held on April 17 from 3 p.m. to 4 p.m. in 501/504 in the School of Management where President Drinan will be available to answer more questions about One Simmons and the university’s overall financial situation.